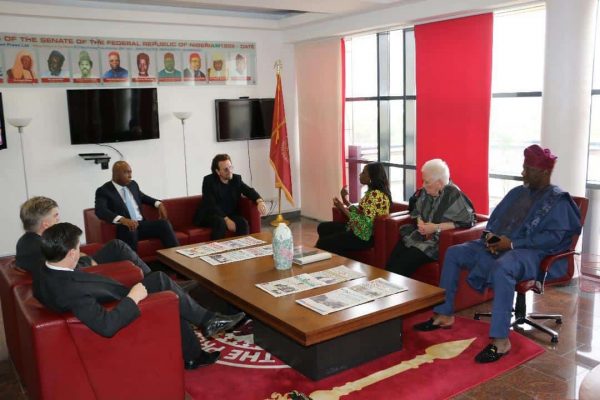 The Co-Founder of the ONE Campaign, lead-singer of the Irish multi-award winning rock-band, and philanthropist, Paul David Hewson, also known as Bono (U2), on Tuesday thanked the 8th National Assembly for including a clause in the 2018 budget that guarantees the use of 1 per cent of the Consolidated Revenue Fund of the Federation for primary healthcare.

“You made it happen,” Bono said to the President of the Senate, adding: “People were, and have been talking about it for many years, but nobody was doing anything about it.

“But you made the 1% for healthcare happen. Nobody wants earmarks, but you made it happen. Its going to be really important for people’s lives. The decisions made in this building are decisions of life and death in this case, so, we thank you for making the decision for people that we may never even meet.”

Responding, Saraki, who received the visitors in the company of Senate Minority Leader, Senator Biodun Olujimi and Senator Dino Melaye, stated that he had his colleagues from both the Senate and the House of Representatives to thank for the passage of the 1 per cent appropriation for healthcare in the 2018 budget.

Saraki also told his visitors that as a medical doctor, he saw the improvement of primary healthcare across Nigeria as a necessity and hoped that moving forward, the efficient implementation of the 1 per cent for Primary Healthcare would be addressed.

The President of the Senate said: “The issue now is to get the 1% allocation out of the Consolidated Revenue Fund (CRF) operational, so that we can begin to improve our primary healthcare system across the country.

“What we need to consider now is to see how that fund can be seed capital for the private sector to come in and expand the system. Depending on government to build these healthcare centres and make them functional on a long-term basis is not going to work.

“I have had the opportunity to be a Governor for eight years, where I pushed the health insurance scheme in partnership with the private sector, so I have seen it work.

“Otherwise, we will find out that every year, we will have the same budgetary provisions for this 1% Clause for Healthcare and that we have not moved forward in improving our primary healthcare system.”

I am now free of COVID-19 — FCT Minister