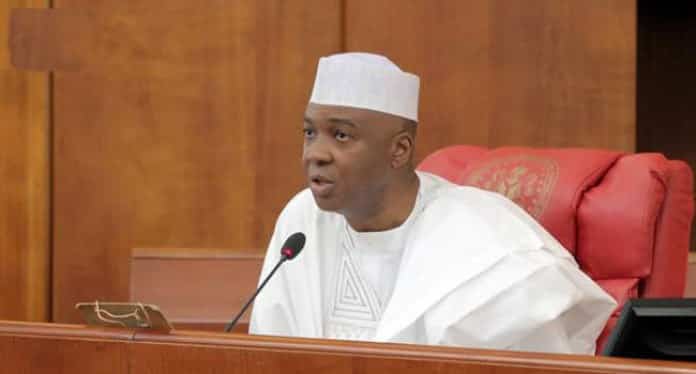 The President of the Senate, Dr Bukola Saraki, has cautioned Nigerians against any actions, statements and moves that could truncate political process in the country.
Saraki gave the warning in his message to Nigerians on the 19th anniversary of unbroken elected government in the country signed by his Special Adviser on Media and Publicity, Yusuph Olaniyonu.
Saraki advised the people to be vigilant and speak against anti-democratic policies and actions, which are capable of subverting the ‘Rule of Law’.
He also admonished citizens not to take for granted the continued democratic dispensation the country had been enjoying for the past 19 years.
The Senate President canvassed strict adherence to the principles of rule of law, separation of powers, sovereignty of parliament, independence of the judiciary, and freedom of the press.
He said: “Our constitutional institutions must be preserved and protected.
“As we celebrate democracy today, I congratulate our people and express my conviction that this system of government is the best so far invented.
“However, it goes beyond the conduct of elections to put leaders in office. Democracy involves strict adherence to rule of law as against the rule of men.
“It is about respect for due process and following laid down procedures and it is about respect for the institutions.”
According to him, that is why Democracy Day cannot be celebrated without calling for caution on some recent negative developments in the polity, particularly as the nation prepares for 2019 general elections.
Sraki said: “These include abuse of office in a manner that suggests persecution and oppression of perceived enemies, stifling of free expression, undermining of democratic institutions, and impunity on the part of certain persons, who behave as though they are above the laws of the land.
“These developments should be of concern to all democrats.

“Other political and opinion leaders, who decided to veil their sight as if they are not seeing these infractions on democracy and choose to keep quiet, should know that they equally pose danger to the survival of our country.
“At this point, let us remember and salute our heroes of democracy, those who toiled and paid different prices for us to have elected government, particularly, those who paid the ultimate price with their lives, their labour shall definitely not be in vain.”