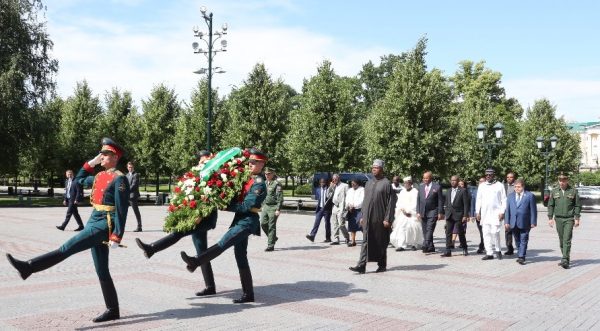 Share
Facebook Twitter LinkedIn Pinterest Email
The President of the Senate, Dr. Abubakar Bukola Saraki, has assured the Russian Government that Nigeria is conducive for investors especially in the oil, gas, agriculture, mining and power sectors of the economy.
Saraki stated this during a meeting with the leadership of the Upper Chamber of the Russian Parliament – Federation Council of the Federal Assembly of the Russian Federation –  in Moscow, led by its Chairperson, Valentina Matviyenko.
He said: “Russia could take a more active part in economic and business projects in Nigeria. Your State must necessarily play its role on the African continent.
“Together we could consider new opportunities for mutually beneficial economic cooperation.”
Saraki called for increased access for Nigerians willing to visit and do business in Russia, improved trade relations and military support to aid Nigeria in the fight against terrorism, human trafficking and irregular migration.
He said there is greater need for parliamentary cooperation and collaboration between the two parliaments in order to entrench better legislative practices, cross fertilize ideas and improve relations between both countries.
He said while Nigeria appreciates the assistance the Russian Government has rendered to Nigeria in the supply of military hardware to fight Boko Haram, more support is needed to fully restore security and normalcy in affected areas.
He said that the National Assembly is eager to work with the Russian Parliament to strengthen Nigeria-Russia relations and by extension the African continent.
“Russia and Nigeria need to strengthen cooperation for the prosperity of our peoples,” Saraki said.
On her part, Matviyenko said the Russian Parliament will continue to build on the good relations between Nigeria and Russia while collaborating closely with the National Assembly.
She thanked the President of the Senate and his delegation for the visit Senate and said that Russia values the existing good diplomatic relations between both countries.
Post Views: 0
Dr. Abubakar Bukola Saraki Moscow Russian Government Russian Parliament Valentina Matviyenko
Share. Facebook Twitter Pinterest LinkedIn Tumblr Email