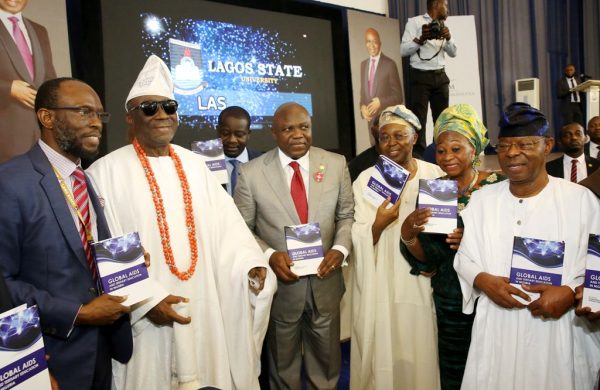 The Lagos State Governor, Akinwunmi Ambode, on Thursday assured that the governorship candidate of the All Progressives Congress in the State for the 2019 general elections, Babajide Sanwo-Olu, will not abandon ongoing projects but rather complete and build on the enduring legacies already put in place by his administration.
Ambode said this while inaugurating an ultra modern lecture theatre donated to the Lagos State University by businessman and philanthropist, Remi Makanjuola.
He said while efforts were on to complete all the major projects initiated by his administration, Sanwo-Olu would nonetheless complete those ones he is unable to deliver before the expiration of his tenure next year.
He said: “I am so excited about the fact that Mr. Sanwo-Olu has actually come out here and he has issued a promissory note and what that mean is that we are going to have a government of continuity.
“For whatever structures that we have in LASU right now, and I’m going to also convince our chief negotiator, Dr. Wale Babalakin, we are already doing Senate building here, we are doing Students Arcade and we are also doing the Library, I hope I will be able to complete and finish them but if I am unable to complete them, I speak on behalf of Mr. Sanwo-Olu that he will finish and also do the Staff School.
“We are not campaigning yet but truly that is the spirit of the kind of governance that we bring to Lagos; that is the spirit that we really want to see and then we should be able to show leadership in all spheres of life that we find ourselves.”
Speaking on his administration’s intervention in the educational sector, Ambode said in the last three and half years, at least N15 billion has been invested in revamping infrastructure in schools across the State to ensure students can learn in a conducive environment, while 3,400 primary and secondary teachers were employed to improve the teacher to student ratio as well as quality of learning in schools.
The Governor said beyond the upgrade of infrastructure, the State Government developed innovative solutions to bridge gaps in education system and to position Lagos State for a technology-driven future, including the ReadySetWork and CodeLagos initiatives, noting that while 34,000 students have graduated from the former, the latter is geared towards teaching one million Lagos residents to code.
He said: “At the grassroots level, faced with the realization that about three million Lagos residents could not read or write in any language, we commissioned Eko Nke Koo (Lagos Is Learning), an initiative aimed at raising the literacy rate in Lagos State from its current 87% to 95%.
“Through Eko Nke Koo, the Lagos State Agency for Mass Education increased the number of adult literacy centres across the State from 532 centres in 2016, to 782 as at January 2018.
“We have also recorded improvement in enrolment and retention rates of learners in the programme. In 2017, 98 per cent of enrolled learners graduated from the programme.”
Ambode said in LASU, his administration had also carried out notable projects targeted at ensuring the institution remains academically competitive, financially viable, and most importantly, conducive for learning.
The Governor noted that last year, the State carried out major infrastructure development and road works to give the school a facelift befitting of its status as one of the top State Universities in the country, while it had also benefited from a significant increase in subvention to assist in ensuring smooth running of the school.
He disclosed that he had approved for the development of a 6,000 bed hostel, which, according to him, will increase accessibility and improve security for students in the institution, as the demand for higher education continues to grow.
“Reflecting on these investments, I must acknowledge it has been the privilege of this administration to build on the works of visionaries who came before us; and to be given the opportunity to raise the mark higher as we look ahead to a bright future for our State and Country,” Ambode said.
The Governor also seized the occasion to commend the Makanjuola for donating the ultra-modern lecture hall to the institution, saying the gesture would forever be remembered by generations.
He said: “It has also been a true privilege and honour to work alongside collaborators – whether large scale organizations or well-meaning individuals in society – who recognize their role in State and Nation building, and have worked tirelessly to support the efforts of government.
“Today’s occasion is symbolic of this citizen-partnership. Indeed, Mr. Makanjuola has sown a seed that would outlive him by bequeathing this Ultra-Modern lecture Theatre to the University. Sir, this is a gesture that will be remembered for generations and for that we are eternally grateful. And in the same vein, on behalf of the Government and people of Lagos State, and the entire Lagos State University community, I say a very happy birthday to you, Sir. In another 48 hours, our philanthropist will be 70 years old. Congratulations, Sir.”