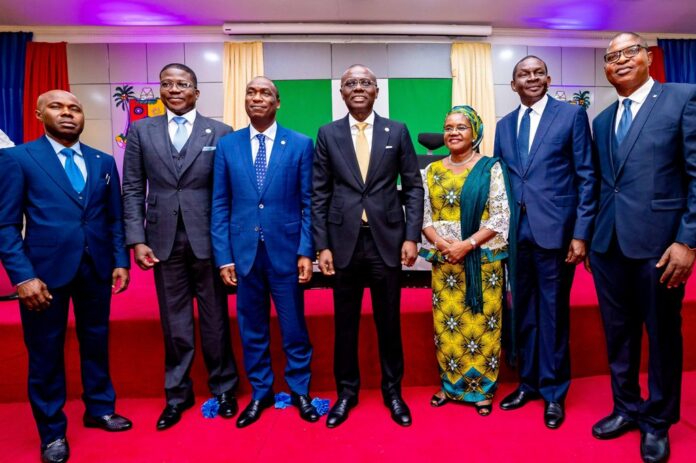 The Lagos State Governor, Babajide Sanwo-Olu, has charged newly appointed members of the Lagos State Cabinet as well as Commissioners in the State’s Civil Service Commission to kick off action immediately.
The Governor said this on Monday at the Lagos House, Alausa during the swearing in of three new members of the State Executive Council, members of the Civil Service Commission and five Permanent Secretaries.
Sanwo-Olu urged the new appointees to further add value to the administration toward delivering democratic dividends to Lagosians.
The Governor said the new appointees were called to serve from the pool of numerous competent and highly qualified Lagosians, adding that they must work hard to justify the confidence reposed in them with the appointment.
He said: “You have been brought on to add value in our quest to deliver the dividend of democracy to the citizens. We are pushing the emblem of our party and we have started implementing several programmes under our project T.H.E.M.E.S.
“We must remember that in four months time, we will be celebrating our first anniversary.
“The question that people will be asking is that what have we done in one year? Time will come and time will go but it is what we do with time that prosperity will judge us with. The essence of this reminder is to keep each and everyone of us on the go and to let you know that we need to hit the ground running.
“We cannot afford to be complacent in our approach to governance because there is so much to be accomplished within the 1,460 days that we are rushing against. We cannot afford not to succeed because our success has indication for the mission’s wellbeing. We owe it a duty to live up to the reputation of centre of excellence through the injection of innovative and visionary ideas into governance.”
The new political appointees are one Commissioner and two Special Advisers, who will be joining the State Executive Council.
They are Engineer Paul Bamgbose Martins, sworn in as the new Commissioner for Special Duties and Intergovernmental Relations; Gbenga Oyerinde, Special Adviser to the Governor on Central Business District; and Ganiu Adele Ayuba, Special Adviser, Urban Development.
Regina Fabanwo was sworn in as the new Chairman, Lagos Civil Service Commission along with Adeshina Odeyemi, Hon. Avoseh Suru; Hon. Kamal Olorunoje and Babatunde Seriki, who will serve as Commissioners in the Commission.
The five new Permanent Secretaries are Olujimi Ige, Debt Management Office; Kafayat Ajenifuja, Parastatal Monitoring Office; Hakeem Adeniji Oduyinka, Office of Civic Engagement; Isaac Olushina Thorpe, Ministry of Information and Strategy; while Dr. Aina Ayoola moves up as the PS Primary Healthcare Board.
The Governor reiterated his administration’s determination to ensure that it delivers time bound and people-focused programmes that will positively impact Lagosians on a daily basis.
Earlier, the Lagos State Head of Service, Hakeem Muri-Okunola, described the Governor as a team player, saying it was in this spirit that he appointed more hands to further deliver on the T.H.E.M.E.S agenda of his administration.
The occasion was graced by the Deputy Governor, Dr. Obafemi Hamzat; Secretary to the State Government, Folashade Jaji; past and present members of the Federal and State House of Assembly; and well wishers of the newly appointed members.