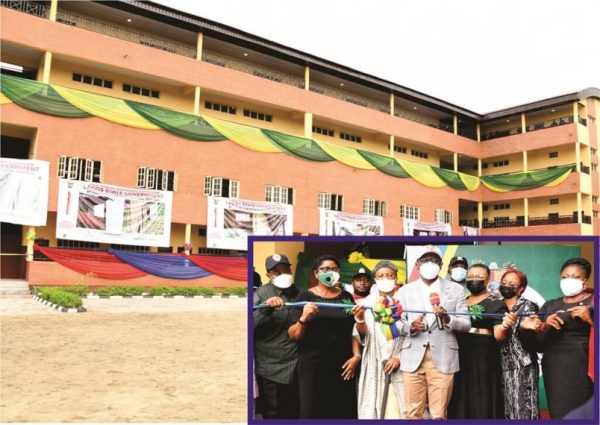 The multi-level ultra-modern buildings are part of the infrastructure projects completed by the Ministry of Education under the Lagos Metropolitan Development and Governance Project (LMDGP), which is covering 970 basic and secondary schools across the State.

Sanwo-Olu inaugurated the school projects amid praises by teachers, students and their parents. As he stopped in each of the beneficiary schools to formally open the buildings, the Governor was warmly received by cultural troupes made up of pupils, singing in appreciation of the gesture.

Sanwo-Olu said his administration’s intervention in education was predicated on revamping the learning environment and introduction on technology to raise quality and deliver excellent results.

He said education remained one of his Government’s building blocks to achieve its vision of Greater Lagos, adding that the projects would further strengthen the effort to achieve the goals in “Education and Technology” pillar of his T.H.E.M.E.S Agenda.

He said: “The move to actualise our Greater Lagos vision is hinged on delivering quality education as building blocks. We flagged off the upgrade of infrastructure in schools to deliver 300 classrooms, including seven new hostel blocks across our boarding schools.

“Some of the projects are being commissioned today and they include a block of 18 classrooms with administrative offices, library, laboratory, toilets, and water supply systems each at Igbobi Junior College, Fazil Omar Senior High School Iwaya and Onike Girls High School, Iwaya.

“We aggressively embarked on these projects to accelerate our children’s access to world-class learning environments, thereby providing requisite facilities and security in the schools that cut across Education Districts and Local Government Councils. All of these efforts are taken to expand access to quality education for our children irrespective of their location.”

In complementing the facility upgrade, Sanwo-Olu said the State Government had started to roll out fibre optics across the State-owned schools to aid learning through high-speed Internet connectivity.

Before end of the month, the Governor said broadband Internet infrastructure would be completed and commissioned in 100 schools selected for pilot scheme.

From next week, Sanwo-Olu disclosed that members of the State’s Executive Council would be commissioning iconic schools projects across the State, as part of the activities marking his second year anniversary in office.

The Governor acknowledged the national feats in academic recorded in the 2021 National Junior Engineers, Technicians and Scientist (JETS) Competition held last February in Abuja, in which pupils of Lagos State origin won 11 medals and 10 trophies in various categories of the academic contest.

Also at the recently concluded Maltina School Games, Lagos emerged the Overall Best State, clinching 21 gold medals. Sanwo-Olu described the feats as part of the results of his administration’s investment in education.

He promised to continue to improve the standard of education and quality of teaching personnel to make Lagos schools a positive reference point.

He said: “The infrastructure being put in place in our schools would amount to nothing if they were not complemented by competent, dedicated and passionate teachers. I assure all parents that the standard of education will continue to rise and we will not stop until Lagos schools become a positive reference point across the globe.”

Commissioner for Education, Folashade Adefisayo, said the Governor’s focus was not on infrastructure upgrade alone. She said the State’s intervention had also touched all elements of the value chain in education, including teachers’ recruitment and training, teachers’ rewards, curriculum review, investment in technology for learning, and provision of teachers tablets, among others.

She said the inaugurated projects were parts of the 1,097 projects being undertaken by the Sanwo-Olu administration, covering comprehensive upgrade of 970 public primary and secondary schools.

He added that the Committee, since its inauguration in November 2019, had embarked on the construction of several classroom blocks, school hostel accommodation cutting across 100 primary and secondary schools in the State.

On the top most floors of the inaugurated schools are laboratories, assembly grounds and office spaces for teaching personnel.