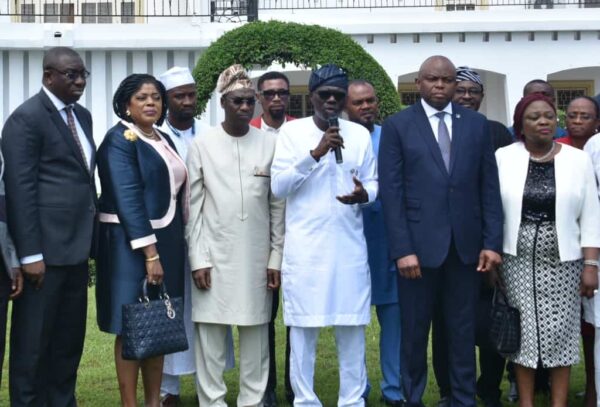 The Lagos State Governor, Babajide Sanwo-Olu, and his Deputy, Dr. Obafemi Hamzat, on Thursday met with Igbo market leaders from Alaba, Trade Fair axis in Lagos West Senatorial District.
The consultative meeting, which was at the instance of the Governor and coordinated by the Managing Director Fidelity Bank, Nnamdi Okonkwo, lasted for about 90 minutes and it was centred around the State Government’s plans to improve security and upgrade infrastructure around the markets.
Speaking to newsmen after the meeting, Governor Sanwo-Olu said the discussion was aimed at fostering collaboration with the traders and to carry them along in the plans of the Government.
The Governor said he was not satisfied with the conditions under which businesses were conducted in the markets, expressing disappointment over the state of roads and absence of relevant public facilities around markets.
In fulfilling his campaign promises to the traders, Sanwo-Olu said his administration was prepared to change the condition by investing in infrastructure that would improve the quality of lives and commercial activities in the area.
He said: “We have just finished an interactive meeting with the leaders of various markets around Alaba, ASPAMDA, Trade Fair areas in Lagos West Senatorial District and the discussion was coordinated by our friend in the banking sector, Fidelity Bank.
“We are just coming out of the meeting, where we all agreed that we all have roles to play to address infrastructure and other challenges around the markets. As a government, we are taking up the responsibility to design an all-inclusive model that will improve the economic wellbeing of people around the markets. Once we put infrastructure in place, not only would businesses flourish, employment will also be created.
”Aside constructing network of roads surrounding the markets, the Governor said part of the Government’s long-term plans was also to complement the efforts with provision of amenities, including fire stations, clinics, general hospitals and security units that would aid commercial activities in the markets.”
Sanwo-Olu said the market leaders agreed to work with the Government on documenting all businesses in their respective jurisdictions, which would facilitate easy payment and collection of tax for developmental purposes.
The Governor said: “We had conversations around being socially responsible. So we will see the traders living up to the expectations in terms of doing what they are meant to be doing to support government in the areas of their taxes, wages and levies. We also want to eliminate multiple taxations; any agency that is not meant to be around the market will be stopped.
“We also discussed security issues, and I assured that government would help to improve on the security of lives and properties in the area and the state in general. We will address the menace of Okada riders all around those markets. We will also ensure that the work that is going on around Lagos-Badagry Expressway is well coordinated, so that they can have some relief at various periods of the day, even when construction is going on.”
Sanwo-Olu said the meeting would not be the last in his engagement with the market leaders, pointing out that Chairmen of local councils in which the traders operate would be invited to subsequent discussions before the start of regeneration work across the markets within the senatorial district.
Fidelity Bank’s Managing Director, Nnamdi Okonkwo, hailed Sanwo-Olu for partnering with the market leaders to drive the regeneration programme, saying the Governor understood the importance of engagement in leadership.
According to Okonkwo: “Fidelity Bank was one of the first banks to open in the area and we understand their challenges from the extensive engagements we do have with them. We bank most of them and when there are issues we come together to interact and find solutions. This is exactly the approach that Governor Sanwo-Olu is using today.
“The Governor has outlined a course of action and we also use our knowledge of their needs and working in collaboration with the government, to come up with a model that will work for all stakeholders. The traders are ready to take this collaboration to the end and make sure they have better market conditions so when they want to pay their taxes, they will pay them happily.”
The President General of Alaba Amalgamated, Chief Fabian Ezeojika, said the discussion with the Governor and his Deputy was fruitful, promising to mobilise traders to respect the agreement made with the State Government.
Markets and dealers represented at the meeting included Alaba International Market, Auto Spare Parts and Machinery Dealers Association, BBA Trade Fair, Alaba Fancy and Furniture Dealers and Electrical Dealers Association of Nigeria.