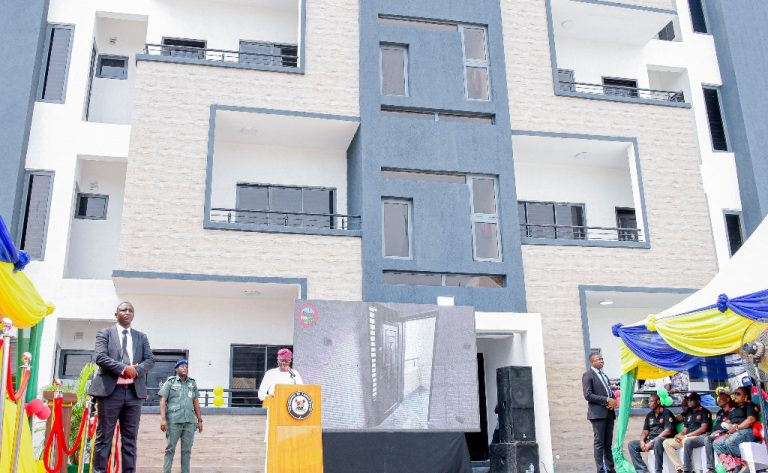 The opening of the mini-housing scheme was greeted by spontaneous jubilation in the neighbourhood. Residents, in their number, trooped out to receive and appreciate Governor Sanwo-Olu for transforming what used to be a criminals’ hideout into a cosy residential asset.

Besides, the Governor also opened a vocational training centre built by LSDPC on Owolewa Street in Surulere.

Sanwo-Olu said the redevelopment of the abandoned land had not only provided accommodation for residents, noting that a major security threat in the area had also been solved.

The Governor said the transformation further reiterated the commitment of his government to urban regeneration and infrastructural renewal. He commended the two agencies for the collaboration that led to the development.

“The land on which this project is sited used to be a security liability for residents of this neighbourhood. It was previously a massive school compound before the school was moved out of the site. The land was taken over by people of questionable character, who committed all sorts of atrocities and constituted threats to the residents’ peace. We had a conversation with SUBEB for the conversion of this fallow asset into a living asset.

“Today, the elegantly designed residential edifice is the outcome of the collaboration between LSDPC and SUBEB. We have created an enabling environment for government agencies to collaborate with the private sector in order to reduce the housing needs of our people. Now, the beneficiaries of this scheme can raise their family in this nice ambience and serene environment. Community members will also live in harmony, as we have eliminated a major threat to their peace.”

Sanwo-Olu said the provision of safe and comfortable housing schemes for the citizens remained a key objective of his government’s programmes, noting that the intervention had helped his administration to raise standards of living.

He said the State Government remained committed to scaling up access to safe and convenient housing while strengthening partnerships with the private sector to meet Sustainable Development Goals (SDGs).

More housing projects, the Governor said, will be inaugurated before the end of the year. He charged beneficiaries to maintain the structure and encourage activities that would sustain the investment.

“For residents living in this neighbourhood, this development presents an opportunity to key into the Government’s urban regeneration programme and improve their environment to raise the quality of living. We must join hands to ensure the mega status of Lagos is sustained,” Sanwo-Olu said.

LSDPC Managing Director and Chief Executive Officer, Hon. Ayodeji Joseph, said the housing scheme was built to reflect simplicity and elegance, while also being complemented with contemporary infrastructure. The apartments, he said, have dedicated uninterrupted power source in addition to being connected to the national grid.

Joseph said the Owolewa Vocational Centre was built by LSDPC as a Corporate Social Responsibility to give back to the Surulere community to further aid the State Government’s efforts at empowering young people with modern skills.

“I salute the maturity and cooperation displayed by the SUBEB management during the period of discussion to change the use of the property and rights to acquire it. Today, the outcome has become a win-win situation for both the LSDPC and SUBEB,” Joseph said.