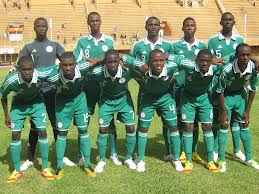 One of the most successful scribes of Nigerian football, Alhaji Sani Toro, on Thursday sent his best wishes to the Golden Eaglets ahead of the 2013 Orange CAN U-17 to be hosted in Morocco between April 13 and 27.
Toro was on line to the team’s Aspire Academy for Sports Excellence camp in Doha and was quoted as saying that the Nigerian team cannot afford to fail after its superlative qualifying results.
The Golden Eaglets are the only team at the forthcoming tournament with 100 per cent record in the qualifiers where they won all their six matches as well as scoring a remarkable 21 goals.
“It is good you went to Doha to prepare well for the tournament,” Toro said in telephone conversation with the Team’s Secretary, Tayo Egbaiyelo. “I’m looking forward to watching the team in Morocco and please convey my best wishes to the players and the coaching crew.”
Toro, who supervised some of the golden era of Nigerian football, including winning the country’s second FIFA Under-17 World Cup title at Japan ’93, in the meantime, has been described as an astute administrator.
“Alhaji Toro is a wonderful person with genuine interest for the development of Nigerian football,” noted Nduka Ugbade, Golden Eaglets’ Assistant Coach, who incidentally captained Nigeria to win the inaugural FIFA Under-16 World Cup at China ’85. “Alhaji Toro belongs to that class of administrators alongside the likes of late Patrick Okpomo that usually wants the best for Nigerian football.”
Meanwhile, Toro would expectedly serve as one of the key officials during the CAN Under-17 in Morocco as a member of the organising
committee of the continental cadet competition.