Breaking: US condemns use of Soldiers on #EndSARS protesters 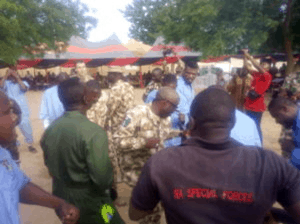 Biu took to the dance floor after the Chief of Army Staff, Lt.-Gen. Tukur Buratai represented by the Chief of Training and Operations, Maj.-Gen. Enobong Udoh, and other senior officers served the troops with sallah meal.
He said the army authorities decided to celebrate the 2019 Eid-el-Kabir with both the troops in the theatre of operations and those in the hospital in order to encourage them to recuperate fast.
The GOC said the division had on Sunday feasted with the troops at the battle field at the Mulei super camp.
He said the celebration was primarily to encourage the officers that were for one reason or the other not completely on their feet but recuperating fast at the 7 Division Medical Services and Hospital, Maiduguri.

We intend to come and join them here so that we conduct this celebration here together.
He said; “I want to assure that our presence here is to encourage you, motivate you and for you to believe in yourself that your contributions today are well acknowledged.”

Biu commended the chief of army staff for what he described as motivational leadership and concern for troops welfare, adding that Buratai had led by example.
He added; “His drive for professionalism, his unwavering commitment to the successful prosecution of the war against Boko Haram terrorism.
“The chief of army staff  has remained committed that his desire for peace, security and total restoration of the dignity of the people of the Northeast and indeed Nigeria at large is realised very quickly,”

Breaking: US condemns use of Soldiers on #EndSARS protesters

#EndSARS: Buhari yet to speak with me since Lekki killings — Sanwo-Olu

#EndSARS: Lekki shooting, other killings: Victims will get justice — Osinbajo

Kalu serenades wife on her birthday