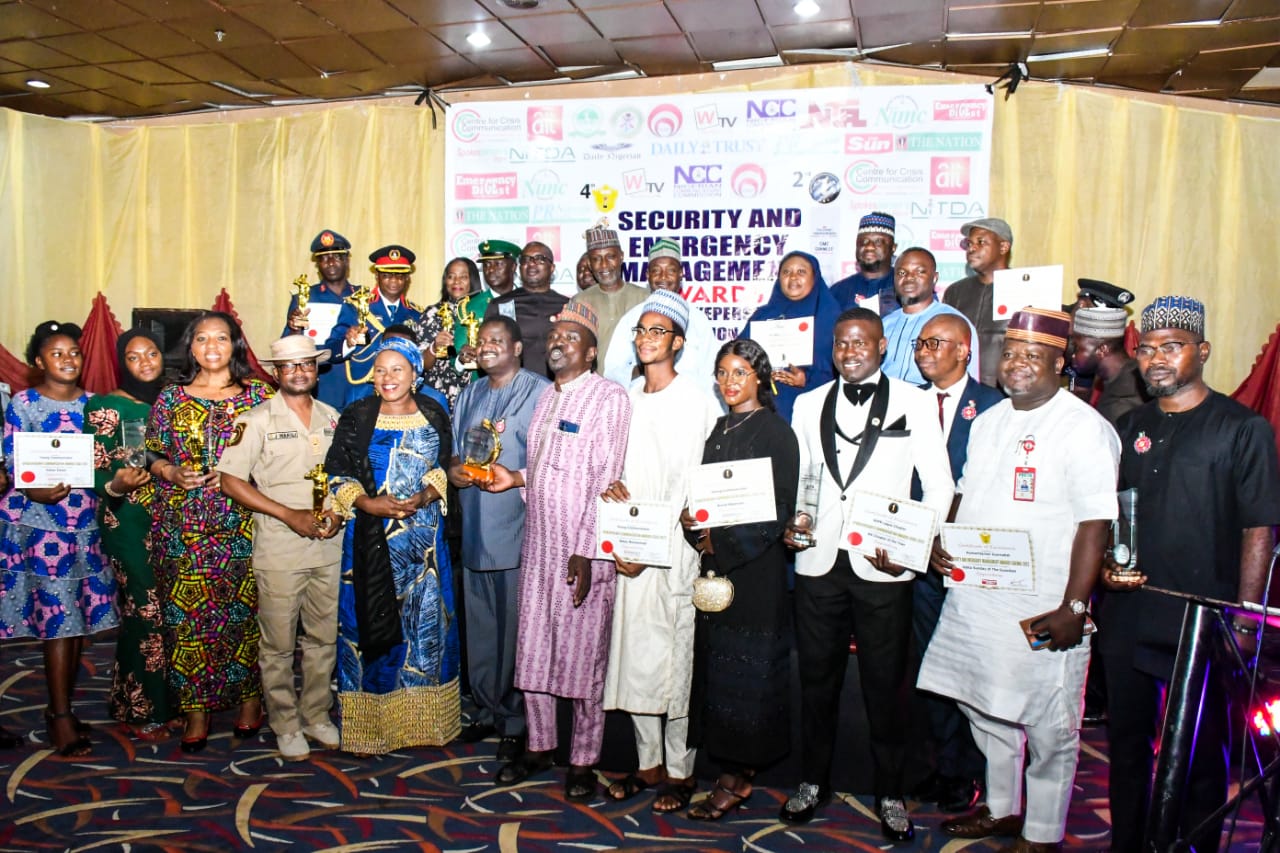 Special Adviser on Media and Publicity to the President,  Femi Adesina; Spokesperson for Department of State Security Service (DSS), Dr. Peter Afunanya and Media Aide to Justice Minister, Dr. Gwandu, were among the recipients celebrated at the annual ‘Security and Emergency Management Awards’ (SAEMA); and Spokespersons Communication Awards’ (SCA).

The dual events took place at the Nicon Luxury Hotel in Abuja.

Adesina who was chairman of the occasion was surprised when he was conferred with award on Strategic Communication as a Distinguished Fellow of SCA.

President of the Nigerian Institute of Public Relations, NIPR, Mallam Mukhtar Sirajo, in a keynote address, while decrying worsening insecurity in the country, highlighted the importance of strategic communication as a panacea for mitigating all kinds of socio-ethnic tensions.

Sirajo recalled how the institute recently deployed strategic communication as a tool for enhancing national integration in the contemporary Nigerian state, which he said is divided.

The NIPR boss, observed that their ‘Citizens Summit on National Peace, Security and Integration’, which was held across the six geo-political zones some few months ago, brought Nigerians from different walks of life to harness their diversity for the collective good of all.

“What the SAEMA and SCA convener, Mal. Yushau Shuaib of PRNigeria is doing by annually organizing these auspicious events, is part of the strategic communication needed to re-set Nigeria,” said Sirajo.

In his remark, Adesina lauded Mal. Shuaib for consistently providing the general public with authoritative and factual information on security-related issues and matters.

“PRNigeria is my go-to on insurgency and banditry reports. It is one news medium which many people do not doubt its reportage on security issues,” said the presidential spokesman.

Adesina, while speaking further, lamented that majority of Nigerians prefer negative reports about setbacks suffered by military and security agencies against terrorists, bandits and other criminals.

He said: “You that spread the good news about the success story of our troops become the butt of their jokes and their enemy”.

The Director of Defence Information, Major General Jimmy Akpor commended the PRNigeria for hosting the annual awards on security and communication.

“In the military, we trust the credibility and the independent editorial of PRNigeria as it reports activities in the sectors with fairness, accuracy and facts that also protect our national security and interest,” Gen Akpor added.

While welcoming guests to the ceremony, Shuaib, who also is the Publisher of PRNigeria and Economic Confidential, said that their SAEMA has so much become a household name among security agencies, stakeholders and experts “that we received 145 entries this year, out of which we had to work round the clock to come up with two finalists for each of the categories.

He said: “Let me however at this point make it known that all the finalists are thoroughly deserving of not only the nomination but also the awards. It was therefore a lot of work, via a transparent process, before our team of unbiased experts and professionals could select the eventual winners who will go home with the award plaques”.

Like every year, he noted that some winners of their last year SAEMA and SCA events also conquered Africa and the world.

“At the Digital Communication Awards (DCA) in Germany, NITDA was also shortlisted among the finalists with another award-winning book “Digital Innovation for Economic Prosperity.” All these came a year after IMPR was declared the most creative PR Agency in the world (2020),” said Shuaib.

The former recognizes outstanding gallantry and contributions to safety, security and Emergency Management in Nigeria, while the latter recognizes the most outstanding public relations campaigns and communications strategies by professionals, groups and institutions.

Individuals honoured at the awards ceremony include Femi Babafemi of NDLEA as the Spokesperson of the Year;  Dr. Umar Gwandu of Justice Ministry for Public Affairs;  Dr. Peter Afunanya of the Department of State Services, DSS, for Crisis Communication; Lt. Col. Ishaya Aliyu for Gallantry; Air Comdr Edward Gabkwet for Crisis Management, Ismail Omipidan for Media Relations, ACP Daniel Amah as the Security Officer of the Year, Mal. Ibrahim Salim Umar of Daily Trust as Humanitarian Journalist of the Year among others.

Meanwhile, a group of students from the Ahmadu Bello University Zaria were honoured with Young Communicators Awards.