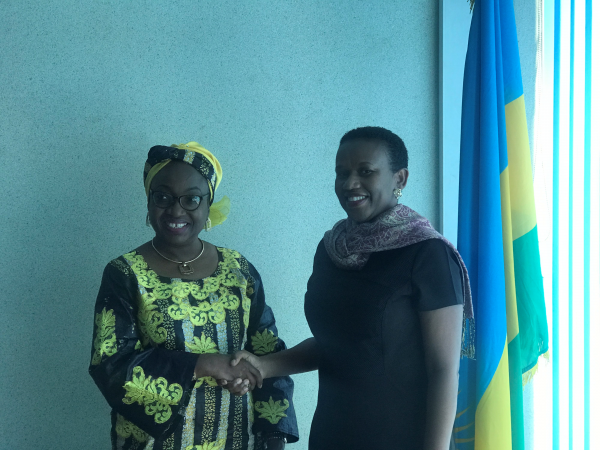 The Government of the Republic of Rwanda is to partner Nigeria on ways to revive the devastated public service in the North-East region.
Rwanyido Fanfan, Rwandan Minister of Public Service and Labour, said this while receiving Winifred Oyo-Ita, Head of Civil Service of the Federation on Monday in Kigali.
Oyo-Ita said: “We are going to expose you to our strategy and reforms after the genocide and we can also learn from your experience and share knowledge.
“The road map that you have chosen to assess how we survived after the genocide is a good one.
“African countries need to partner each other to ensure sustainable development because we have same system, whatever works in Rwanda can work in Nigeria, instead of borrowing the western culture.”
Earlier, Oyo-Ita who led a delegation on a Post-Conflict Learning Visit to Rwanda, said that Nigeria was desirious of building an excellent public service.
According to her, Nigeria wants to also learn Rwandan recruitment process, capacity building and retention as well as their reconciliation initiatives.
The Head of Service noted that the lessons learnt would be implemented in the North East states of Adamawa, Borno and Yobe which would be used as the pilot scheme.
The News Agency of Nigeria reports that the Ministry through its Permanent Secretary Gaspard Musonera gave the delegation from Nigeria a lecture on the history and survival strategy of Rwanda and its public service.
Musonera attributed Rwanda’s present glory to political will of the leaders and a decision to forgive and forget the past.
He said in order to rebuild their public service; they were able to carry out various reforms in their public service.
The reforms included restructuring of public institutions, refining as well as reviewing their mandates.
He added that institutions with similar responsibilities were merged to avoid duplication.
He said they also established a single project implementation unit to streamline execution of government projects as well as various education reforms.
The Head of Civil Service of the Federation and her team also paid a courtesy visit to the Rwandan Cooperation Initiative.
The Chief Executive Officer, RCI, Muhire Antoine, said that the RCI was focused on cooperation between African countries, pledging his support for the success of the study tour.
He noted that reconciliation among conflicting parties was a major factor that ended the genocide.
He added that in Rwanda, people who committed the genocide were being released after rehabilitation.
He added that the court system does not convict any one to death rather it gives life imprisonment.
Antoine said that the policies put in place were inspired by their past experience and as a compromised decision to move forward.