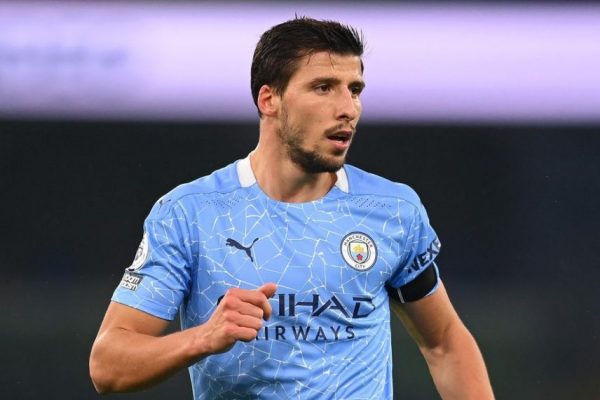 Manchester City stalwart Ruben Dias has been named the Football Writers’ Association Footballer of the Year after winning the Premier League title during a brilliant debut season with the club.

Dias has made 31 top-flight appearances for Pep Guardiola’s triumphant side after joining for a club-record £65 million from Benfica last September.

The Portugal international takes over from Liverpool captain Jordan Henderson as the reigning FWA Footballer of the Year after edging out Tottenham striker Harry Kane and City teammate Kevin De Bruyne in a vote of almost 700 members.

In total, nine City players received votes which accounted for over half of all votes cast.

Dias has been the finest centre-back in the Premier League this season and has helped City achieve the best defensive record with just 32 goals conceded in 37 games.

FWA chair Carrie Brown said: “Ruben Dias turned heads soon after his arrival in Manchester, a 23- year-old belying his age with fortitude, steel, a relentless drive for perfection and an almost superhuman ability to read and anticipate phases of play.

“This, while commendable, would not alone qualify a player to win the FWA Footballer of the Year award. One of our founding members, Charles Buchan, prescribed the award to recognise and celebrate a player who ‘by precept and example’ is considered to be the footballer of the year.

“Pep Guardiola improves players, shapes them but at no point, has a new signing arrived into one of Pep’s already trophy-laden teams and exerted such influence.

“Dias has demanded the highest standards which have resulted in the swiftest of upturns in fortune not solely for Dias himself, but team-mates to his left, right, front and centre.

“Ruben Dias is our Football Writers’ Association Footballer of the Year for his leadership on and off the pitch as much as for the infectious joy he derives from executing the art of defending to perfection.

“I wonder if it is quite poignant that, in a time when so many find their backs against the wall, there is heart to be taken from the joy Dias exudes in standing firm and quelling the storm.

“Perhaps, in this of all seasons, Dias is the leader we all need.”