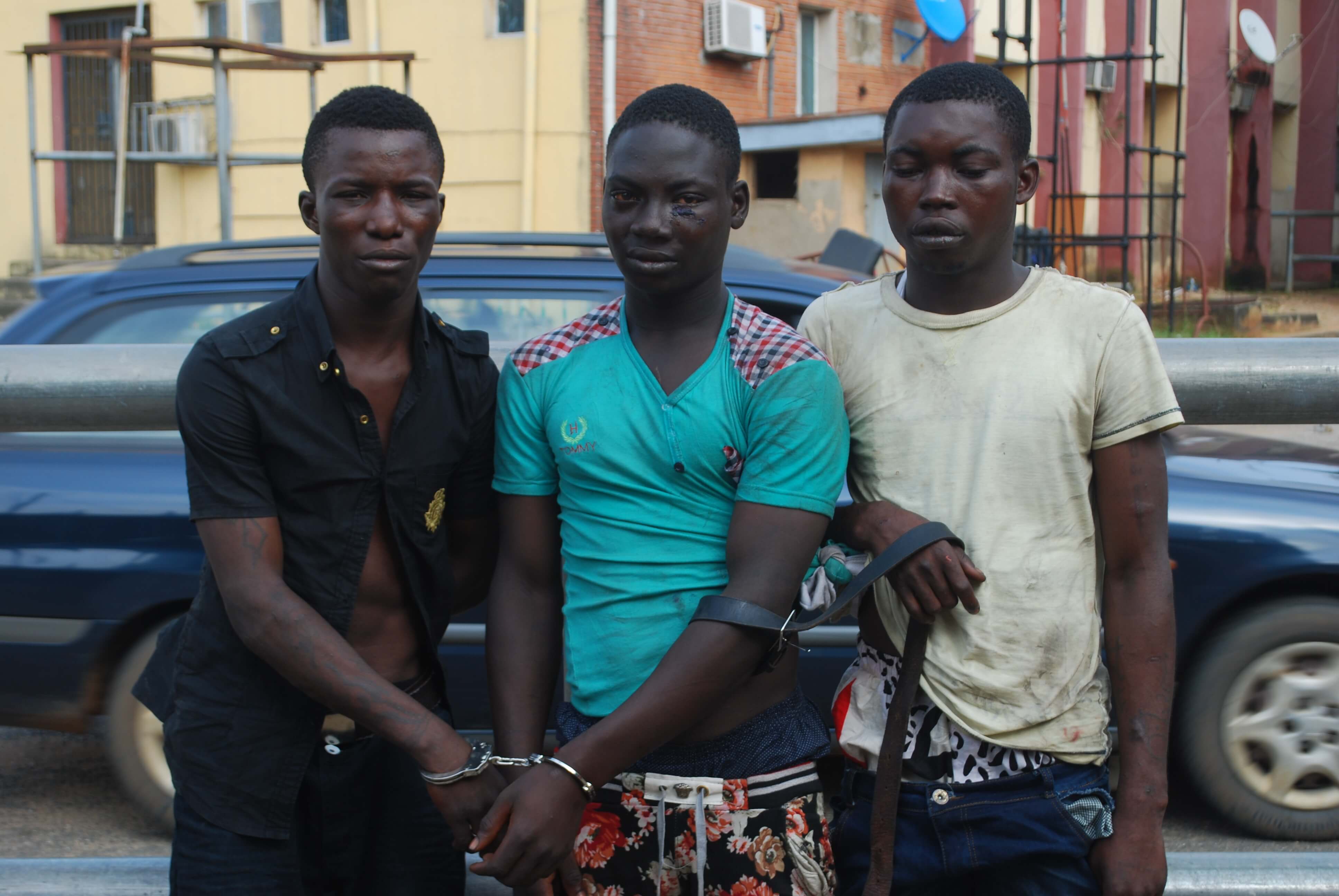 The operatives of the Rapid Response Squad of the Lagos Police Command in the early hours of Sundayarrested three ex-convicts for traffic robbery in Oshodi area of the state.
The robbery suspects – Adekunle Mustapha, 21; Popoola Olumide, 20; and Femi Amusa, 20 – were arrested following the tip off from their victim, Olasunkanmi Oyelakin, who alerted the Police that his blackberry phone was stolen by the suspects during early morning traffic around Bolade, Oshodi.
The victim recounted his ordeals to the Police: “I was on my way to Ajah at about 6:30am. I saw Adekunle Mustapha pass by the bus I boarded. Unknown to me, he was monitoring me. A few minutes later, I noticed a missed call on my phone and as I brought out the phone, Mustapha took the phone from me through the bus window and ran away. Because there was traffic, I made no attempt to struggle with him, but got down from the nearest bus-stop and I began to monitor him. I noticed that he had regrouped with his friends and one of them was telling him to hand over the phone he stole from me.
“I knew I couldn’t handle the three of them all alone, so I informed the RRS operatives who followed me down to the place where he was arrested.”
The visibly distraught Mustapha said he was driven by frustration to steal the handset from him.
He said trembling: “I am a bus conductor in Oshodi. I am from Ibadan and a secondary school dropout. I sleep in Ojuwoye, Mushin. I am an ex-convict. I don’t want to go to prison again. Government should please have mercy on me. I was frustrated into traffic robbery. I won’t do it again.”
Mustapha’s accomplices, Popoola Olawale and Femi Amusa, said although they saw Mustapha in Oshodi regularly, they are also bus conductors and not in-traffic robbers. They added that they were in Lagos to make money to buy their working tools having completed their apprenticeship.
In another development, the RRS has recovered a locally made gun with a cartridge in Surulere.
The gun was recovered about 2am by a RRS man on a regular patrol of Iganmu Bridge by Brewery, Surulere.
The policeman had spotted three men standing in a suspicious manner.
The men on sighting the officer took to their heels.
However, when a search was conducted where the men were standing, a locally made short gun was found with an unspent cartridge.
Confirming the story, the Deputy Superintendent of Police in charge of police image making in Lagos State, Joe Offor, said the three suspects have been charged to court.