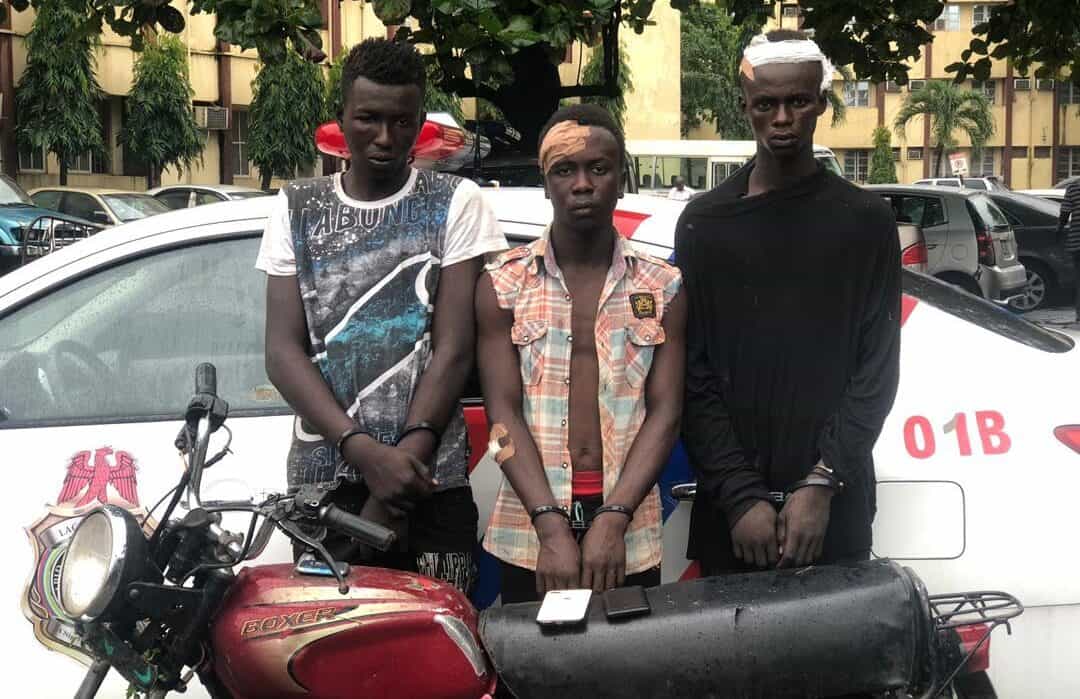 Three robbers operating on Ogun Long Bridge, Isheri, Ojodu-Berger and Agidingbi, Ikeja have been arrested by the operatives of the Lagos State Rapid Response Squad and two android phones which they had snatched were retrieved from them.
The suspects, Issa Jidda (15), Alli Jumah (19) and Adamu Mohammed (22), were arrested on Sunday around 8:46pm around Olowopopo Way, Ikeja after robbing two ladies in Agidingbi, Ikeja and Isheri.
According to one of the suspects, Jidda, the gang had been operating on Ogun Long Bridge, Isheri, Unilag Estate, Gateway Estate, Ojodu-Berger, Fela Shrine and Agidingbi since May 2019.
He said: “We have been operating since last month. I was invited into the gang by Adamu. He is the leader of the gang. I have gone out on robberies with them seven times. Our targets are mobile phones, wallet and jewelry.
“We also rob in traffic, especially Long Bridge. We avoid operating in Kara because we live there. Our colleagues might see us. We sell the phones and share the money.
“The motor cycle that we use is owned by Alli. The three of us operate on it using a knife and dagger as our arms.”
The trio were arrested by RRS patrol team after it responded to a distress call that some robbers on bike were operating in Agidingbi.
The officers trailed the robbers to Olowopopo Way, where a motorist who got a hint that the suspects were being chased hit their okada to prevent them from escaping into the Lagos-Ibadan Expressway.
The owners of the two android phones snatched in Gateway Estate, Isheri and Agidingbi identified the suspects.
They have been transferred to the Special Anti-Robbery Squad for further investigation.
Commenting on the development, the Commissioner, Lagos Police State Command, Muazu Zubair, urged Lagosians to continue to cooperate with the police in order to address some of the security challenges in the State.