by The Eagle Online
in Crime
3 min read
0

The operatives of Rapid Response Squad of the Lagos State Police Command have arrested three suspected robbers who lured a UBER driver into the bush, strangulated him and made away with his Toyota Camry, 2006 model, just as it recovered two locally made guns and seven live cartridges from another set of suspected robbers on Eko Bridge. 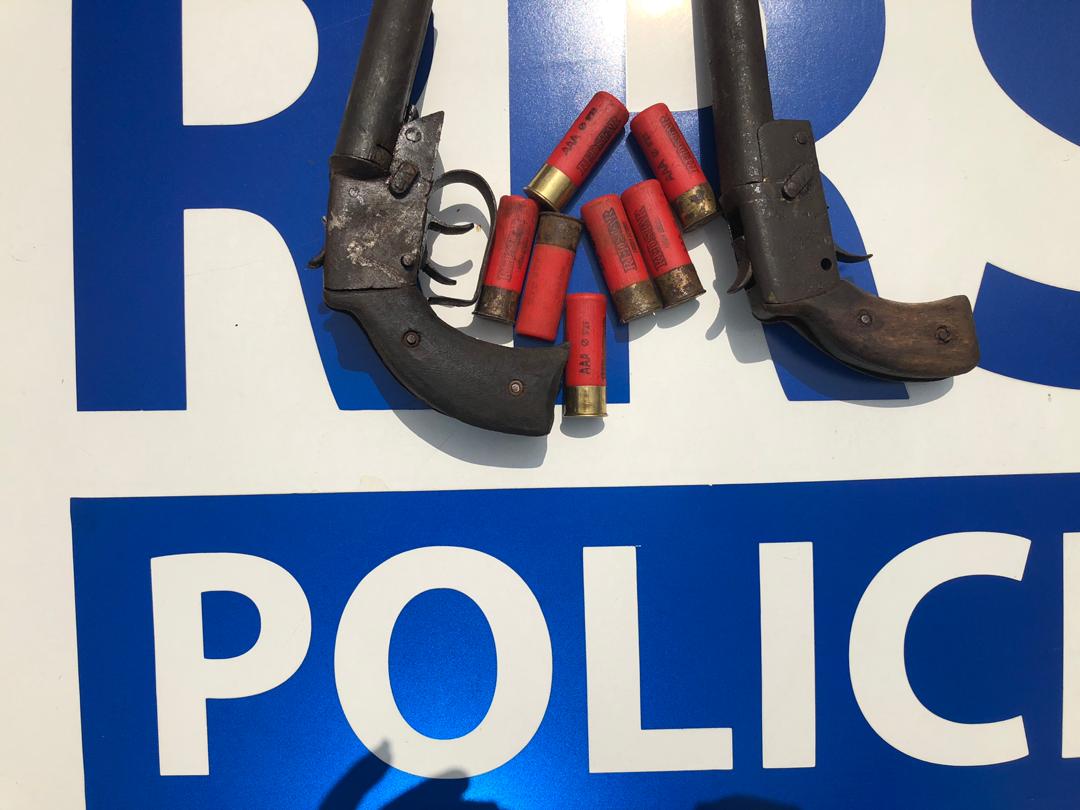 The suspected UBER car hijackers were arrested in the early hours of Thursday in Lekki, Lagos, when the suspects were on their way to hand over the snatched car to a buyer.
Some RRS operatives had few hours to the arrest prevented six robbers from accessing the Lagos Island after it chased a convoy of three motorcycle riders and recovered two loaded and cocked guns from the suspects.
Sources said the six suspected robbers were on motorcycles riding against the traffic on Eko Bridge when they sighted RRS patrol vehicle approaching.
Trying to detour, the parcel containing the loaded and cocked guns fell just as they were speeding away.
The robbers escaped, while the officers were retrieving the guns.
The suspected UBER robbers, Daniel Alagor (28), Samuel Effiong (25), and three other suspects, still at large, had on Wednesday night requested for UBER through Alagor’s phone line.
Supported by one Blessing (still at large), Alagor told the UBER driver, Ekwomi Charles, to take the duo to Abijo GRA from Jakande Estate, Lekki at around 11pm.
Almost midway into the trip, Blessing, according to Alagor, the mastermind of the car snatching plan, told the driver they were going to a birthday party in Shoprite, Sangotedo, and that they were going to pick two of their colleagues up in Abijo GRA, Ajah.
The UBER driver in his statement to the police stated: “I agreed to pick their friends and drop them at the venue of the party as we were already in Abijo GRA.
“I noticed that their friends were not at the bus stop.
“They called their friends and we agreed I move into the Estate to meet them on their way.
“I drove about 100 meters and I didn’t encounter them.
“I insisted I was going no further.
“They eventually came and immediately they entered the car, they tired a rope around my neck from the back.
“Then, all of them started punching me till I passed out.
“Thinking that I was dead, they took me into the bush and dropped my body near an uncompleted building.
“They left beside me a knife after tying me.
“Thank God, I woke up later.
“I reported at the closest police station and eventually, I learnt RRS men have arrested them.”
The suspects, according to sources, after presumably killing the UBER driver left one of them in Abijo GRA, while three of them Alagor, Blessing and another suspect, whose identity police are working on, drove the car to Shoprite, Ijeshatedo to pick Samuel Effiong, who already negotiated with a buyer based in Fashola Estate, Lekki.
According to Effiong: “Blessing some time ago told me that he wanted to sell a car.
“He called me on phone around midnight of Wednesday to take him to the person that wants to buy the car.
“They picked me up in Shoprite, Sangotedo.
“I didn’t follow him to where they stole the vehicle.
“We were close to Fashola Estate, when we ran into RRS patrol vehicle.
“They stopped us for a check.
“Blessing and his friend bolted, while Alagor and I were arrested.
“They also arrested the Emeka Okoye, alias Tallest, who wanted to link us to the buyer.”
Police investigations to where the UBER driver’s body was deposited by the suspects led to the recovery of further evidence like a kitchen knife, ropes and fez cap, reportedly belonging to Blessing.
Lagos State Commissioner of Police, Muazu Zubairu, while applauding the two developments, directed all the suspected be transferred the State Criminal Investigation Department for further investigations.