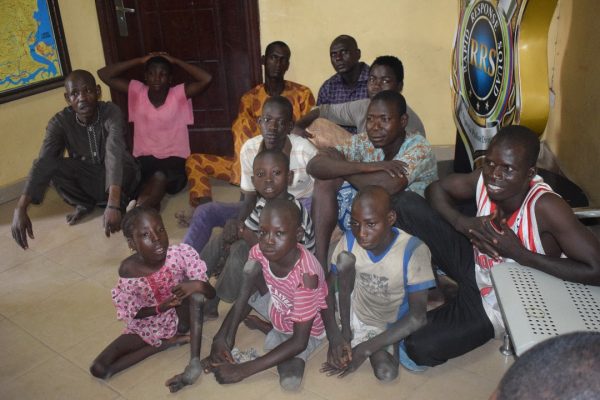 The Decoy Team of the Rapid Response Squad, Lagos State Police Command has arrested seven suspects for importing eight physically challenged children into the State for the purpose of begging on Mobolaji Bank Anthony Way, Ikeja.
The seven suspects along with six of their eight beggars were arrested midday on Monday at Mobolaji Bank Anthony Way after almost a week of monitoring by the Decoy Team of the unit.
The arrest, according to the RRS Commander, ACP Olatunji Disu, was based on intelligence received from one of its social media platforms, indicating that some group of people were importing physically challenged children into Lagos and were using them as beggars.
The suspects arrested are: Sanni Isiaku (40), Abubakar Gahu (50), Abdullahi Mohammed (45), Nasiru Yusman (21), Mato Abdullahi (20), Nura Idris (17) and Sagiru Ibrahim (26).
The physically challenged children found in their possession are: Aminu Kabiru (12), Yusuph Nasiru (9), Amina Kabir (12), Ayuba Idris (12).
During preliminary interrogation, Mato Abdullahi narrated: “I hired Amina Kabir from her mother who happened to be my sister. I bring her early in the morning to ‘Under bridge’ to beg. She begged while I wait around.
“At the end of the day, we make between N3000 and N4000. Depending on what we made, I remove my own and I hand over the remaining to the lady.
“Before, we make between N5000 and N6000. But now, things have changed. We don’t make up to that anymore. A lot of us are here now. Before you get to one car, another set of beggars have gotten there.
“We have other people we settle daily. He is like our overseer. He has his own cut in what everybody makes. He comes through for us whenever there are problems like arrests.”
According to Abubakar Gahu: “I use my son for begging. There are five of them. He is physically challenged. Three others are in school in Agege. The last one is still very young.
“He is the money making machine while his brothers go to school, I bring him here for begging. It is whatever we raise daily that we use in maintaining the family.”
Disu said the case has been handed over to the Gender Department of the Lagos State Police Command for further investigation.