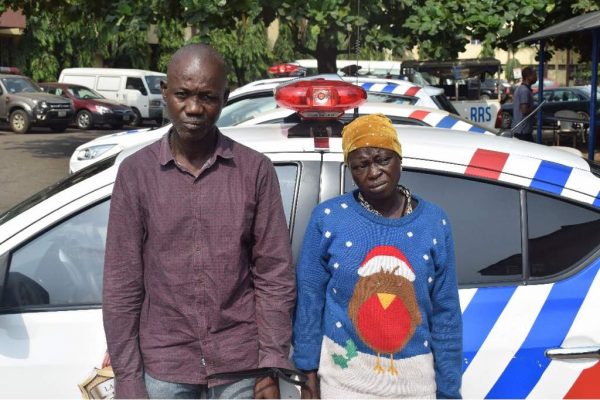 One of the three mobile CCTV camera procured by the Lagos State Government for the Rapid Response Squad has assisted the police in arresting two suspected phone thieves and two fraudsters in Oshodi.
The four suspects were caught on the footage of the mobile CCTV camera stationed in Oshodi to assist the officers of Rapid Response Squad in their surveillance activities in the area.
The suspects, Jelili Ganiu (19), Samson Owolabi (23), Segun Lawoye (47), who is an ex-convict and Toyin Samuel (38) were arrested in Oshodi on Thursday and Friday.
Jelili and Owolabi were caught on footage of the camera stealing substance suspected to be mobile phone from a passer-by on Oshodi pedestrian bridge.
They were monitored through the camera thereafter exchanging the stolen item with another suspect currently at large before returning to the same location.
They were later trailed by RRS operatives attached to the vehicle and arrested at the foot of the pedestrian bridge.
Both men after interrogation confessed that they stole an Infinix Hot mobile phone from a passer-by on the bridge and that the third suspect who they exchanged the object with was the keeper of their stolen items.
Jelili added that the third suspect, Omo Nla, is the one who sells the phones, with the money shared in the evening.
Jelili said: “Owolabi and I are conductors in Oshodi but when there was no work or we arrive late at the park to re-unite with our bosses, we steal phones, purse and other valuables from the users of the pedestrian bridge in Oshodi.”
The other suspects, Segun Latoye and Toyin Samuel, were arrested on Friday after being caught on camera three times in Oshodi fraudulently dispossessing passers-by of their belongings.
On their last footage, they dispossessed a young lady of her bag containing two mobile phones and unspecified amount of money.
They were captured by the camera hurriedly boarding a bus after hypnotising their victim.
However, the lady regained her consciousness few minutes later and reported the incident to RRS officers who contacted the CCTV mobile camera for footage of the area where the incident took place.
Their pictures were shown to selected people in Oshodi for them to bring to the attention of RRS officers whenever they notice the presence of the suspects in Oshodi.
The suspects, who claimed to be husband and wife, confessed after being shown their video.
Commenting on the development, the Lagos State Police Public Relations Officer, SP Chike Oti, noted that the command would continue to apply technology in combating crime, adding that the suspects would be charge to court.