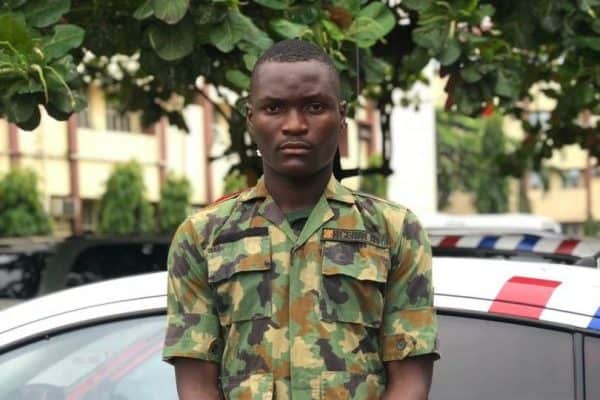 Share
Facebook Twitter LinkedIn Pinterest Email
Operatives of the Rapid Response Squad, a unit of the Lagos State Police Command, on Wednesday arrested a fake soldier and a robber.
The fake soldier was arrested along Mobolaji Bank Anthony Way, near Muritala Muhammed Airport, Ikeja, while the robber was caught in action at Oshodi robbing commuters.
The fake soldier, Yusuf Quadri, 22, from Ogun State, was arrested during a cautious stop and search by RRS officers.
The suspect was riding a commercial tricycle along Airport Road, which has been restricted by the Lagos State Government.
Quadri when stopped by the police told the officers he was a military officer.
A little probe by the officer revealed he was impersonating.
Quadri, a primary school certificate holder, disclosed during interrogation that he stole one of the military uniforms of a newly promoted officer, who he was assisting to get his luggage ready.
He added that he thereafter used the uniform to take a photograph, which he subsequently converted to an identity card.
The suspect in his confessional statement told the police that he made use of his military photograph and outfit to by-pass security operatives, Local Government and Lagos State Traffic Management Authority officials that might attempt to arrest him whenever he was on the wrong side of the law.
The stolen military uniform was recovered from the suspect’s home.
The robbery suspect, Emeka Ohiaeri, from Imo State, had around 8pm on Wednesday night pulled off a mobile phone from the hands of a youth corps member in Oshodi traffic.
Unknown to Ohiaeri, RRS operatives spotted him and trailed him to where he was standing with his colleagues before arresting him.
The phone was recovered from him and handed over to its owner at the RRS Headquarters, Ikeja the following day.
The suspect confessed to the police that since arriving Oshodi few years ago, he had been surviving through stolen phones, purses and handbags.
He added that he had lost count of the number of phones he had collected in traffic.
He emphasised that he has a regular buyer for such phones.
Meanwhile Lagos State Commissioner of Police, Muazu Zubairu, has directed that the two suspects be transferred to the State Criminal Investigation Department, adding that the RRS should reinforce its presence in Oshodi to curb traffic robbery. 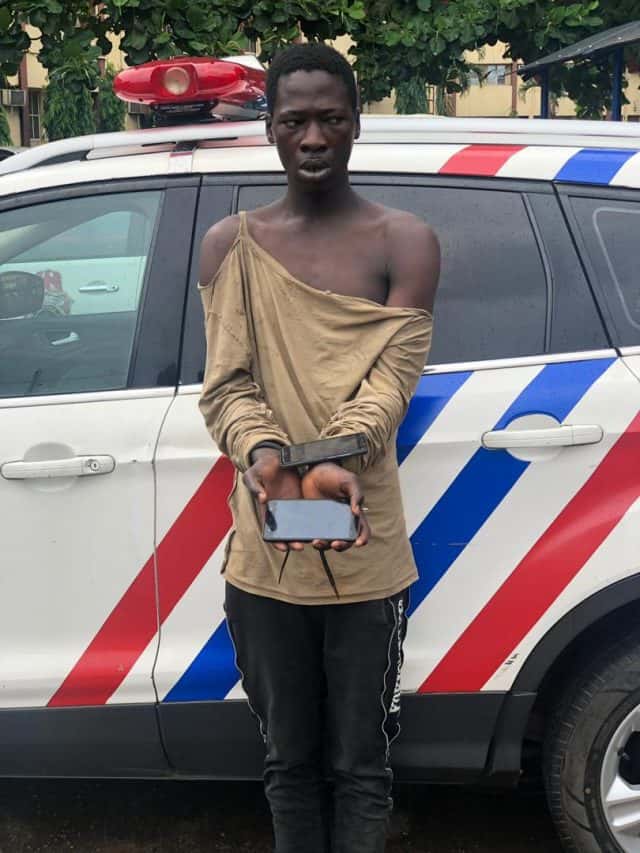