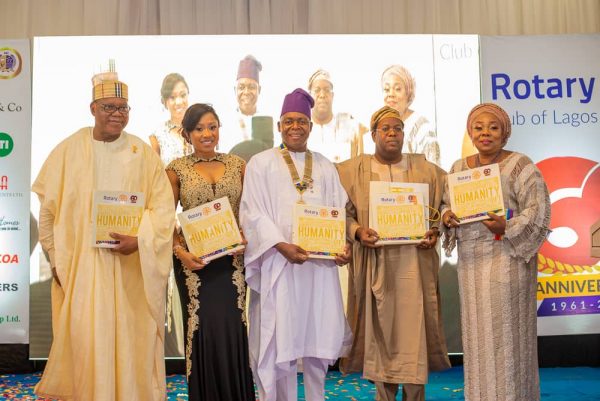 The Rotary Club of Lagos in District 9110 rolled out the drums to celebrate its 60th anniversary with a gala dinner which held as a hybrid event at Oriental Hotel, Victoria Island, Lagos.

The highpoints of the ceremony included the launch of the Club’s Coffee Table Book, a memorabilia showcasing the rich heritage of the club, which was reviewed by Prof Doyin Salami, Chairman of the Economic Advisory Council.

Past District Governor Dr. Tunji Funso who was voted as one of Time Magazine’s 100 Most Influential Persons 2020 was the Guest Speaker.

He noted that as Rotarians, “we cannot stop doing good in the world and affirmed that though Nigeria has kicked the wild polio virus out, we all have to be eternally vigilant to keep polio at zero.”

In his remarks, District Governor Bola Oyebade noted that the Rotary Club of Lagos is the oldest club in the District with 26 charter members in 1961.

He praised members of the Club for their steadfastness and commitment to the ideals of Rotary.

Dare Adeyeri, the 60th President of the Club, expressed immense joy for the opportunity to serve humanity. He said the club executed over 40 projects at over N50m since July last year.

Awards were also given to eminent Nigerians in different categories such as the Ambassadors awards for members of the club that chartered other Rotary Clubs.

In the Distinguished awards category, Past President Kunle Ogunbayo and PAG Hairat Balogun were the recipients.

Bill Egnatoff was a virtual participant and joined from Canada. Egnatoff, who was with his spouse Joan during the ceremony, is a retired Professor of Computer Science at Kingston University in Ontario, Canada. He witnessed the charter ceremony of the Rotary Club of Lagos in 1961. His father, late J.G. Egnatoff, chartered the club.

Also online were Peter Urselmann, President of the Rotary Club of Oberhaussen Antony-Huette in Germany.The German Club is the initiator of the WATER FOR LIFE project at Coke Town in Ifo Local Government Area in Ogun State which will cost over US$80,000.

The project is a collaboration of three partners consisting of the Rotary Club of Oberhaussen Antony-Huette, Rotary Club of Lagos and Adesuwa Foundation based in Germany which was founded by Jennifer Westholt.

Members of the Rotary Club of Lagos and Rotarians from other clubs including Rotaractors, friends and guests of Rotary were also attended the gala dinner.