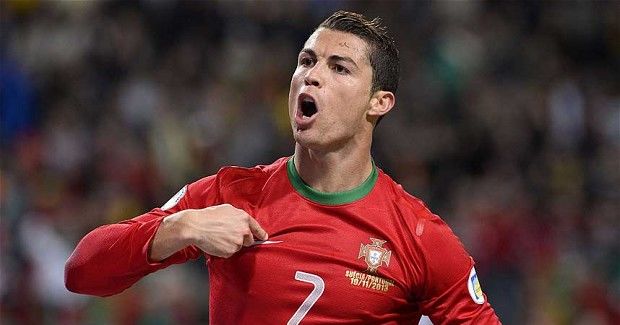 The hat trick by Real Madrid forward, Cristiano Ronaldo, gave the club the maximum three points in the derby at Estadio Vicente Calderon against Atletico Madrid on Saturday night.
It also made him top scorer in the history of the derby with 18 goals.
The Madrid icon was in a devastating form on the night and gave hints of the night’s display when he met Marcelo’s cross with a header in the 12th minute.
The ball, which went goalwards, was parried by Atletico goalkeeper, Oblak.
Undeterred, and with Madrid dominating possession and mounting solid defence, Ronaldo soon found the net in the 23rd minute when his long range free-kick was deflected into the net by Atletico’s wall.
Atlético’s keeper Oblak was stunned with the deflection.
He was helpless this time.
Ronaldo scored the second goal of the night in the 71st minute from the spot after an infraction by Atletico’s Savic.
Then he finished off a low pass from Bale in the 77th minute, to deliver the killer blow against Atletico at the Vicente Calderon, a place they have had difficulties in recent years.
It was a great night for the Los Blancos as they opened up a four point lead over Barcelona FC in the La Liga.
Madrid’s rival, Barcelona, had slipped earlier in the day, by playing a goalless draw with Malaga at Camp Nou.
An excited Coach Zinedine Zidane commented about the night: “I’m not sure if it was our best performance since I arrived.
“We played a great game right from the beginning against tough opposition in a stadium where it is difficult to come and win.
“We read the game well, went in strong and I am happy with what we did because very few teams come here and win 0-3.”
Other results were:
Real Betis 2-0 Las Palmas
Deportivo La Coruna 2-3 Sevilla
Eibar 1-0 Celta Vigo.