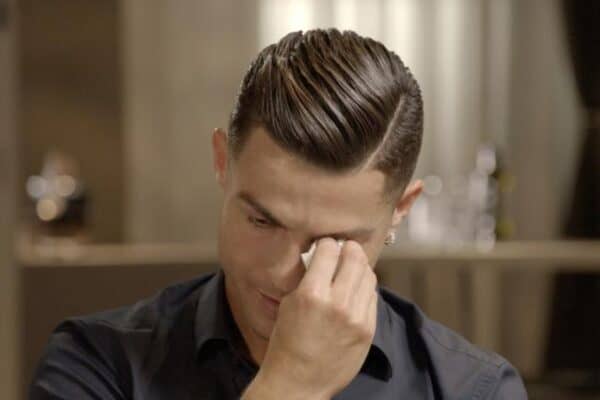 Juventus ace, Cristiano Ronaldo, could not hold back the tears as he spoke about his late father.
Ronaldo has been interviewed by Piers Morgan for a programme that will air on ITV on Tuesday night.
In a revealing conversation, chat turns to Ronaldo’s private life with the Juventus star telling Morgan that he barely knew his father.
Dinis died in 2005 aged 52, just as Ronaldo became the great that he now is.
Ronaldo said: “I really don’t know my father 100 per cent. He was a drunk person. I never spoke with him, like a normal conversation. It was hard.”
The football ace was also shown footage of his father giving an interview ahead of Euro 2004.
And Ronaldo welled up when hearing his dad speak with so much pride.
Morgan asked the former Manchester United star what makes him sad when reflecting on his dad.
The Portuguese star said: “To be the number one and he don’t see nothing, and he don’t see to receive awards, to see what I became.”
Ronaldo also speaks about life with his girlfriend Georgina Rodriguez, who he has one daughter with.
The couple are also raising Ronaldo’s other three children as they live together in Turin.
And Ronaldo opened up on plans to marry the 25-year-old model in the revealing interview.
The former Real Madrid and Manchester United hero said: “We’ll be (married) one day, for sure.
“It’s my mum’s dream as well. So, one day. Why not?”