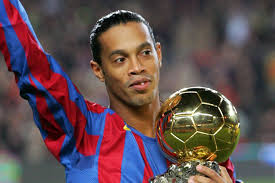 Ronaldinho has put himself forward to run for Senate in 2018.
A few days on from scoring from behind the halfway line in a charity match, it appears the former Barcelona star is plotting a move into Brazilian politics.
According to report, the 2002 World Cup winner will run in the state of Minas Gerais for the Patriota Party (formerly known as the National Ecologic Party/PEN).
The 37-year-old met with presidential candidate Jair Bolsonaro this week and posed for a photo with the politician’s book.
However, before Ronaldinho can run, he has to hope Bolsonaro wins the vote to become the party’s leader in March next year before he can go for the Senate.
The Brazil general election is scheduled to be held in October 2018.
Footballers turning to politics appears to be a popular trend of late. After all, former Chelsea striker George Weah could be the president of Liberia by the end of this year.