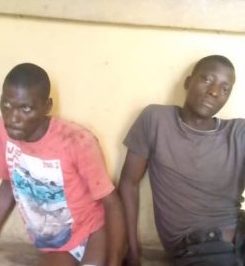 Three armed robbery suspects were arrested on Sunday June 19, 2021 by men of the Ogun State police command after they had an accident while escaping with a Toyota Camry they snatched earlier at gunpoint somewhere in Ondo State.

The suspects – Emeka John, Sunday Emmanuel and Idris Ibrahim – were heading towards Lagos from Ondo State, but due to dangerous driving, the vehicle ran into a culvert somewhere at Ode Remo and somersaulted.

The three occupants of the car sustained varying degrees of injuries and were rushed to hospital by the policemen from Ode Remo divisional headquarters.

While in the hospital, the Divisional Police Officer of Ode Remo division, CSP Fasogbon Olayemi, received information that the vehicle involved in the accident was snatched at gunpoint by the accident victims.

He quickly ordered that they be placed under arrest right in the hospital.

The owner of the vehicle who came all the way from Ondo State explained that he was accosted on the road by a gang of five men dressed like policemen, and that he was dragged out of the car at gunpoint and the vehicle was taken away.

One of the suspects, Emeka John, later died while receiving treatment. The remaining two: Sunday Emmanuel and Idris Ibrahim, were ordered to be transferred to the State Criminal Investigation and Intelligence Department by the Commissioner of Police, Edward Awolowo Ajogun, for onward transfer to Ondo State command where they will be prosecuted.