Robber arrested in Ogun with car snatched in Lagos

A member of an armed robbery gang, Alo Monday, was on Friday arrested by men of the Ogun State Police Command with a Toyota Camry car snatched from one of their robbery victims.

The suspect, an indigene of Ebonyi State, was arrested following a distress call received by the police at Shagamu Division at about 8:30pm that armed robbers were operating along Shagamu-Ikenne Road.

According to information provided by the spokesman of the Command, Abimbola Oyeyemi, in a statement on Sunday, upon receiving the distress call, the Divisional Police Office of Shagamu Division, Superintendent of Police Okiki Agunbiade, mobilised his patrol team and moved to the scene.

On sighting the policemen, the robbers quickly jumped into an already snatched unregistered Toyota Camry, also known as Muscle, and started driving towards Lagos-Shagamu Interchange.

They were hotly chased by the policemen, consequent upon which they abandoned the car and ran into the bush.

The entire area was cordoned off by the policemen who combed the bush in search of the hoodlums.

The effort paid off when one of the robbers, Monday, was apprehended with a sledge hammer, which he used to hit the owner of the car on the head before snatching the vehicle.

The combing exercise drew the attention of youths and commercial motorcyclists in the area, who descended heavily on the suspect and beat him to stupor.

He was smuggled out of the place by the police who took him to the hospital for treatment.

The owner of snatched car, who sustained a head injury inflicted on him with the sledge hammer, was also taken to the hospital by the police. 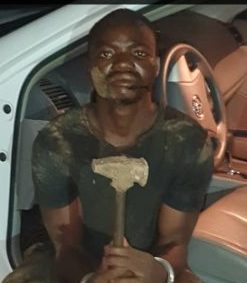 Meanwhile, the Command’s Commissioner, Edward Awolowo Ajogun, has ordered the immediate transfer of the case to the State Criminal Investigation and Intelligence Department for discreet investigation.

Ajogun, who commended the quick response of his officers and men to the distress call, also directed that the fleeing members of the gang must be hunted for and brought to justice within the shortest possible time.

Robber arrested in Ogun with car snatched in Lagos

One killed, five injured as hoodlums clash in Ibadan

My son was killed in my presence, woman tells investigative panel