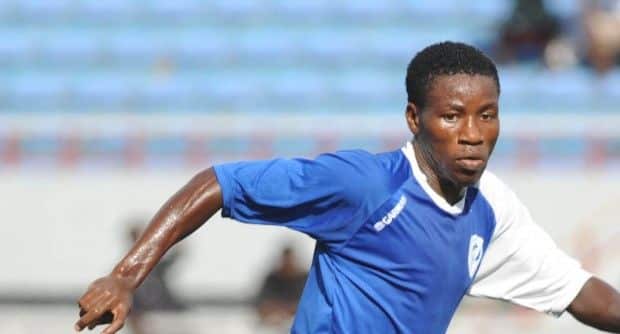 Rivers United’s Frederick Obomate is back to action after making a complete recovery from an injury that kept him out of competitive football for five months.
United midfield general, Obomate, wowed plenty with his uncompromising, all action style, which saw him scoop the award as the Nigeria Professional Football League’s best player in the opening month of the last campaign.
The midfielder played an important role in helping United finish as runners up behind eventual champions, Enugu Rangers, in last season’s NPFL title race.
His performances waned noticeably towards the close of last season as a result of the injury he sustained and he had to go under the knife.
After making a complete recovery, Obomate made his first appearance of the season for United in the NPFL on Sunday, coming on as a second half substitute as the Pride of Rivers put champions, Enugu Rangers, to the sword 1-0 in Port Harcourt .
He said: “I felt very happy making a return to the team.
“I felt very excited and believe I am the luckiest person on earth.
“The severity of the injury made me think at some point that it was all over for me as a professional footballer.
“The orthopaedic surgeon had told me before he commenced treatment that my chances of making a return to professional football was very slim, but I thank God I have made a successful return.”
United will compete on three fronts – the Caf Champions League, the Federation Cup and the NPFL – this season and Obomate is set to play a part in a potentially special season for the football club.
The midfielder said success in at least one of the competitions will be vital, especially given the huge invested made in the team by the sponsor, the Rivers State Government.
Obomate said: “We are taking part in three important competitions and it is important to win at least one of them.
“I will prefer to win the Caf Champions League title if given the luxury of choice.
“There is a saying that ‘to whom much is given, much is expected’ so we must reciprocate the gesture of the Rivers State Government and especially our number one fan, the Governor of Rivers State, Nyesom Wike, towards the football club.
“We must also reciprocate the support of the fans.”
Obomate is an intelligent footballer.
He is one of the few around who made the decision to combine academics with professional football, ostensibly making future plans for life after competitive sport.
Achieving this has however not been easy as he explains.
He said: “It is not easy to combine academics and professional football.
“It has not been easy, but then life itself is a challenge.
“I however made the decision to take up this challenge irrespective of how difficult it would be to combine both football and academics.
“I must use this medium to thank my coaches who have been assisting me in this regard as I attempt to juggle both.
“I am very grateful to them because without their support, it would have been extremely difficult to achieve this.”
Team doctor of United, Chukwuemeka Agi, also spoke on the situation, revealing that Obomate is lucky to still be a professional footballer.
Agi said: “Obomate Frederick complained about pain in his leg and when we investigated and examined me, we realized it might have been as a result of overuse.
“So we asked him to run some investigations, which he did, and what it revealed was that one of the leg bones had an incomplete fracture, which we refer to as a stress fracture in medical terms.
“It is something that occurs from overuse.
“So he was referred to an orthopaedic surgeon, Dr. Bob Yellowe ,who also examined him and asked for a Magnetic Resonance Imaging test.
“With those in place, he was able to treat him, giving both drugs and putting him on Plaster of Paris to ensure that the leg was well-rested.
“He subsequently improved.
“This injury occurred between late October and early December, 2016.
“He was on POP for close to two months before rehabilitation commenced.
“Some players never return from such kinds of injuries because the incomplete fracture becomes complete because of overuse.
“However, in his (Obomate’s) own case, it healed properly and completely.
“I must commend the sponsor of the team, the Rivers State Government, via the Sports Ministry, for consistently making the welfare of players, health inclusive, top priority by responding to our call in this case.
“Obomate is now out of the woods and is now able to assist the team.”