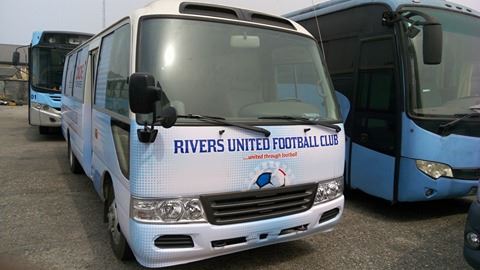 The Rivers State Government on Tuesday presented two brand new vehicles, a
Toyota Hilux and a Toyota Coaster Bus, to the Nigeria Professional Football League club, Rivers United FC.
This was a fulfilment of the promise made by the Governor of Rivers State, Nyesom Wike, during the reception of the team following their successful campaign in the 2016 NPFL season.
Handing over the keys of the vehicles to the General Manager of the club, Chief Okey Kpalukwu, the Rivers State Sports Commissioner, Hon. Boma Iyaye, charged players and officials of the club to consistently strive for excellence as they gun for honours on three fronts.
Rivers United is campaigning for top prizes in the NPFL, Federation Cup and also representing Nigeria in the 2017 Caf Champions League.
On behalf of the club, Kpalukwu expressed gratitude to the Rivers State Government for redeeming its promise, while also affirming that players and officials of Rivers United FC will not let their sponsor down.
The presentation ceremony, which took place at the Rivers State Ministry of Sport, was graced by the National President of the Sports Writers Association of Nigeria, Honour Sirawoo; Rivers United technical manager, Stanley Eguma; as well as Chairman of the Rivers United Supporters Club, Franklin Owhor.