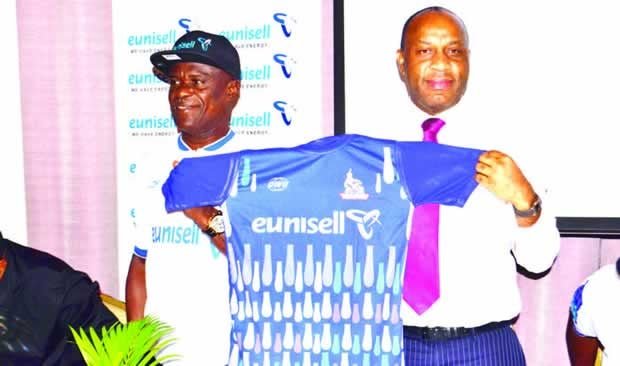 Rivers United are confident that they can challenge for the Nigeria Professional Football League title with support from their front-of-shirt partner, Eunisell.

According to the Rivers United General Manager, Okey Kpalukwu, the Port Harcourt-based club is in the running to win the league title this season and they have put every measure in place to keep their players on their toes despite an enforced break by the outbreak of the coronavirus pandemic across the World.

Kpalukwu said: “We are not hoping for anything less because we also want to be champions.

“But all of that will be determined on the pitch.

“Although we are praying to win the league, we will also put in our efforts and do what is necessary to make it easier for us to actualise our ambition.

“So we are not planning less.

“We are planning to win the league like every other team at the top of the standings.”

Kpalukwu also spoke on their thriving partnership with Eunisell, describing it as “one of a kind.”

He commended Eunisell for backing the club through thick and thin, adding that the chemical and specialty fluid organisation’s contribution to the club cannot go unnoticed.

He said: “Our partnership with Eunisell is one of a kind.

“This is something most clubs are looking forward to having and that is why we must commend Eunisell for this partnership they have kept over the years with us.

“They have never failed us and they have always shown a huge presence.

“This has given the players some kind of boost as well.

“The partnership also points to the fact that we are looking for ways of new streams of income away from what the state government has given to us.

“At the same time, the relationship has been a balanced one.

“Now the Rivers people are aware of Eunisell’s contribution to the club, which has saved us costs.

“We are grateful to them.”

Rivers United Technical Manager/Head Coach, Stanley Eguma, also made the declaration that they want to win the title and finishing second was not part of their ambition.

He explained that players and coaches have been holding meetings via social media platforms to keep team bonding.

Eguma said: “We want to win the league title.

“Everybody that is associated with Rivers United FC knows we cannot afford to play second fiddle.

“The objective is to win the league title and we will not derail.

“It has been hard.

“I have been using technology.

“We use Zoom and WhatsApp for team meetings.

“The players have also been doing their personal training.

“I have told all of them that the league can resume at any moment because no one knows when the COVID-19 will end.

“So we are keeping ourselves prepared.”

Captain of the club, Festus Austine, further reiterated their strong desire to win the title and would rather focus on the challenge instead of worry about the other contenders.

Austine said: “The target is to win the trophy this season.

“Every one of us understands what we need to do to achieve that.

“Our target is to win the NPFL trophy.

“We (the players) have a (WhatsApp) platform where we regularly remind ourselves what we want to achieve this season.

“We are gunning for the league trophy and we are not relenting.

“I also appreciate the players who know what they want.

“And for the teams around us on the log, they have their respective destinies in their hands.

“We at Rivers United have resolved that we are gunning for the league trophy and we will get it right.”

Eunisell Limited Group Managing Director, Chika Ikenga, has also urged the Rivers United contingent to stay within touching distance of the title race and stay on their toes despite the pandemic.

“They are currently second on the table.

“Right now, I urge everyone at the club to stay within the guidelines of the health authorities, as we look forward to the league restarting.

“We are also urging them to give the title chase their best shot because we have faith in them, and that is why we are proud to be associated with the club.”

With 13 match weeks to go, Rivers United are currently in second place with 45 points after 25 matches.