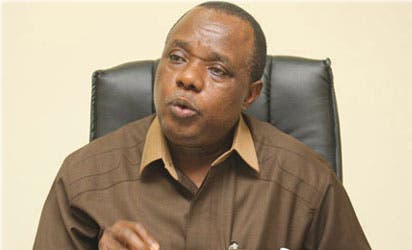 The Revenue Mobilisation Allocation and Fiscal Commission on Wednesday expressed concern over the misconceptions on accessing of funds from the Federation Account by Ministries, Departments and Agencies of government.

Elias Mbam, Chairman of the Commission, expressed the concern in a document made available to the News Agency of Nigeria in Abuja.

Mbam said the only beneficiaries to the Federation Account were the federal, state governments and the local government councils in each state as provided in section 162 (3) of the 1999 Constitution of the Federal Republic of Nigeria.

He further explained that the commission had the mandate to monitor the accruals to and disbursement of revenue from the Federation Account accrued revenue to the federal, state and local governments.

He said: “The commission also advises the federal, state and local governments on fiscal efficiency and methods by which their revenue can be enhanced.”

According to Mbam, this explanation became necessary following a letter from the Ministry of Police Affairs to the Ministry of Finance, Budget and National Planning and copied the commission requesting it to fund “Nigeria Police Trust Fund”.

In the request, the objective of the Act was to provide a legal framework for the management and control of the special intervention fund established under section 3 of the Act for training and retraining of personnel of the Nigeria Police Force.

And also for the provision of state of Art security equipment and other related facilities for the enhancement of the skills of the personnel of the Nigeria Police in the handling of operational equipment and machinery.

According to the letter, sources of funding for the Trust Fund include 0.5 per cent of the total revenue accruing to the Federation Account as well as 0.005 per cent of the Net Profit of companies operating business in Nigeria among other sources.

The chairman reiterated that “the commission is saddled with the responsibility to monitor accruals of revenue into the federation account from revenue generating agencies and disbursement of all the accruals to the three tiers of government while blocking leakages”.

Mbam explained that the President, upon the receipt of advice from the commission, would table before the National Assembly proposals for revenue allocation from the Federation Account.

“And in determining the formulae, the National Assembly shall take into account, the allocation principles especially those of population, equality of states, internal revenue generation, land mass, terrain as well as population density,” he said.