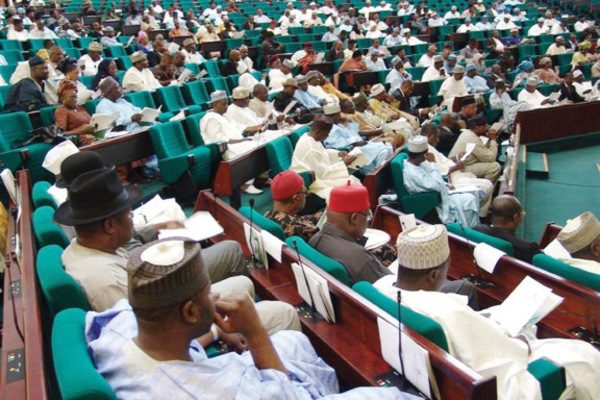 Share
Facebook Twitter LinkedIn Pinterest Email
The House of Representatives, on Wednesday, urged the Presidency to publish the actual amount so far accumulated in the Treasury Single Account.
The House also urged the Presidency to make available the spending plan for the fund as well as a comprehensive list of abandoned projects from which such funds accrued.
The resolution followed the adoption of a motion by Rep. Adamu Kamale (APC- Adamawa), who recalled that the Federal Government operated a pilot scheme for a single account in 2012, using 217 Ministries, Departments and Agencies as a case study.
According to Kamale, it is the success of the scheme that motivated the present administration to fully implement the TSA.
He said: “We are aware of the disclosure by the Minister of Finance, Mrs. Kemi Adeosun, on March 3, 2016 that from the execution of the TSA, a balance of N2.9 trillion has been accumulated from the MDAs.”
Kamale said despite the Federal Government’ s committee to combat corrupt practices, eliminate waste in public finance and ensure adequate fund flow to critical sectors to facilitate development, some establishments were still left out of the TSA platform.
He said: “It is equally of concern that while Section 80 (1) of the Constitution regarding maintenance of Federation Account provides a broad legal framework, it does not address the operational details.
“And concerns have been raised by the Revenue Mobilisation, Allocation and Fiscal Commission about the possible sharing of TSA funds among the tiers of government.”
Kamale said while there was no clear operational details as regards the management of the funds accumulated in the TSA, the need for its urgent utilisation for development and good governance may be delayed.
“It is regrettable that the objectives of TSA to institutionalise transparency, accountability and fiscal discipline in public expenditure may be negated if the plan for its utilisation is not made public,” he said.
The House, therefore, resolved to set up an ad hoc committee to liaise with the Central Bank of Nigeria and other agencies that have roles to play in the implementation of the TSA.
TSA
Share. Facebook Twitter Pinterest LinkedIn Tumblr Telegram Email