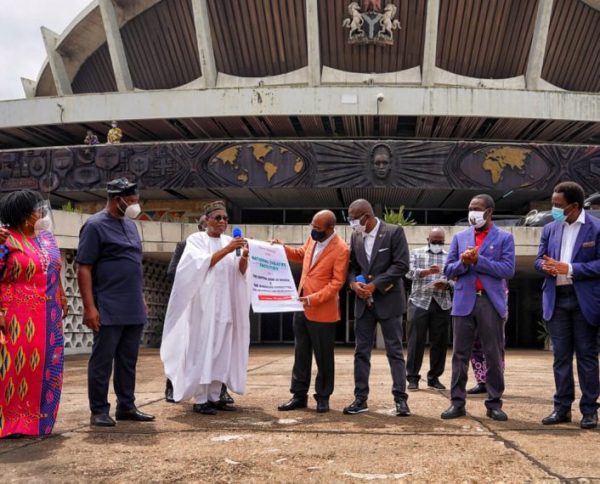 The Central Bank of Nigeria in conjunction with the Bankers Committee has said the National Arts Theatre, when renovated and fully operational, would lead to the build up of a more resilient economy.

The CBN Governor, Godwin Emefiele, made the assertion at the official handover ceremony of the facility to the Bankers Committee for renovation on Sunday in Lagos.

Emefiele said the handover of the facility to the committee was timely, considering the external headwinds facing the country’s economy at the moment.

He said: “The impact of COVID-19 on the global economy and the containment measures that have been put in place to contain the spread of the virus has led to a slowdown in global growth which has also affected the Nigerian economy.

“In addition to the public health challenge, our country is faced with a revenue shock primarily driven by the 40 per cent drop in crude oil prices between January 2020 and now.

“Given our dependence on crude oil as a major source of government revenue, as well as for our foreign exchange earnings, these challenges have served to reinforce the need for stakeholders to promote policies and programs that will enable greater diversification of the Nigerian economy.

“A diversified economy that supports increased productivity in the agriculture and manufacturing sectors, while harnessing the talents of our youths in the creative industries, will lead to the buildup of a more resilient economy, that is better able to withstand external shocks, while creating wealth and jobs for our growing population.”

The CBN governor said the renovation, which would be completed in another 18 months, would have transformed the facility into Nigeria’s Creative Industrial Center.

According to Emefiele, the centre will be comparable to other world class entertainment and convention Centers in any part of the world.

He said the centre, which would comprise Music, Movies, Fashion and ICT, could be a key source of growth for Nigeria’s economy as it would create one million jobs for our teeming youth.

The apex bank Governor, said that it would aid the country’s objective of reducing dependence on revenues from crude oil.

Emefiele noted that India, in 2018, generated over $240 billion from exports of IT, Movies, Music and Fashion related goods and services, which amounted to over five times Nigeria’s annual earnings from the sale of crude oil.

He said Nigeria had the potential to earn over $20 billion annually from the creative industry with its human capital resources and an enabling environment that would harness the creative talents of her youths.

He said with the growing demand for Nigerian music, movies and fashion, across Africa and in various parts of the globe, its creative industries were spurring innovation, creating jobs and helping to shape perceptions of Nigeria as a nation with a strong spirit of creativity and ingenuity.

Emefiele said: “We must do more to encourage the innovative works of these young talented Nigerians as they can make significant contributions to the growth and development of our country.

“Secondly, given our growing population of close to 200m people, out of which 60 per cent are under the age of 35, it is imperative that we strive to create opportunities that will keep our youths engaged, as it would portend great dangers for the progress of our nation if we allow these talents go to waste.”

The apex bank governor also said that the “Creative Industries Financing Initiative” which was set up in December 2018, was to support startups and existing businesses across the four pillars, as well as foster the development of a Nigeria Creative Industries Centre in four major cities in Nigeria.

He said the committee would support the creative venture with about N25 billion of initial funding.

According to him, the facility will serve as the initial pilot for the Nigeria creative industries centre.

He said that following the completion of the renovation works at the theatre, along with the supporting facilities that would be built around it, the committee intended to set up similar Creative Industries centres in Kano, Port Harcourt or Enugu.

Emefiele said the supporting facilities include a hotel and an expansive conference centre.

He said the committee’s goal for the National Theatre was to create an environment where startups and existing businesses are rewarded for their creativity.

The CBN governor said the theatre would support skills acquisition and job creation for over one million Nigerians over the next five years.

He said: “These Nigerians will be empowered with funds at single digit interest rate, high level training using state-of-the-art tools, and networks, that will enable them to turn their ideas into a reality.

“When they are able to achieve their objective of creating a new music product, a high-quality movie, an IT software application, or a fashionable outfit, the bankers committee will work to ensure that they are able to distribute their work on a larger scale.”

Emefiele said individuals would have the opportunity to showcase their work at the creative industries centre, which would expose them to domestic and external investors.

This, he said, could provide them with additional resources, which would enable production and expansion of their creative works.

He said the supporting facilities such as retail outlets, hotels, entertainment centres, and an international conference centre would also help to reposition the centre as a viable location for high level international meetings and conventions.

Emefiele thanked President Muhammadu Buhari for handing over the facility to the Bankers Committee, assuring that these skills are harnessed to support the growth of the creative industries, and by extension the growth of the Nigerian economy.