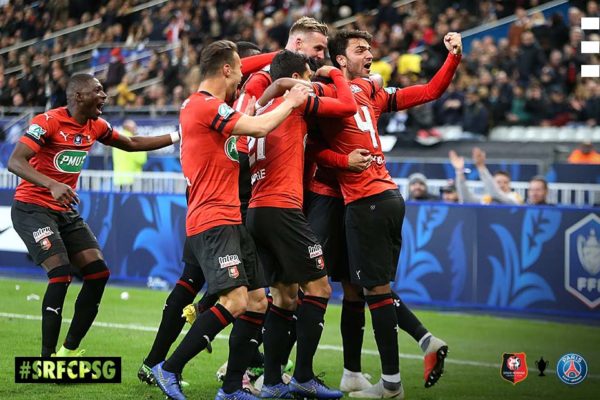 Rennes have won the French Cup, beating Paris Saint Germain in a penalty shootout and denying them a chance to clinch the cup for the fifth time.
Dani Alves had shot PSG ahead in the match at Stade de France in the 13th minute and returnee Neymar doubled the advantage eight minutes after.
But defender Presnel Kimpembe gave Rennes a lifeline in the 40th minute by an own-goal.
In the 66th minute, Rennes equalised with a strike by Mexer.
The match dragged on to extra time, during which PSG’s Kylian Mbappe got a red card in the 118th minute for committing a rough foul on Damien Da Silva.
There were loud protests from teammates.
In the penalty shootout, M’baye Niang, Hatem Ben Arfa, Clement Grenier, James Lea Siliki, Ramy Bensebaini, Ismaila Sarr all scored for Rennes.
Edinson Cavani, Dani Alves, Leandro Daniel Paredes, Juan Bernat, Neymar, scored for PSG.
But Christopher Nkunku missed his sixth penalty, handing over the crown to Rennes.
Rennes won the trophy in 1965 and 1971, but the Brittany club have painful memories of their past two finals — finishing as runners-up to neighbours Guingamp in both 2009 and 2014.