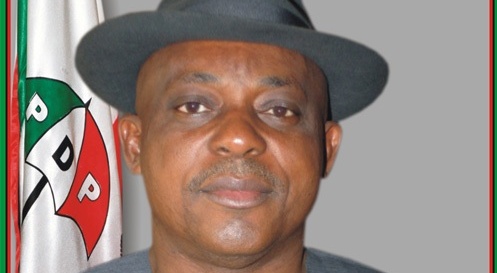 Share
Facebook Twitter LinkedIn Pinterest Email
The Peoples Democratic Party has called on President Muhammadu Buhari to review the appointment of Alhaji Lawal Daura as the Director-General of the Department of State Services.
The Acting National Chairman of the PDP, Uche Secondus, made the call at a news conference shortly after its weekly National Working Committee meeting in Abuja on Wednesday.
Secondus said the DSS boss was an APC member and would therefore not be fair to all political parties.
In a communiqué, the NWC decried what it called the continued intimidation, harassment, hounding, arrest and detention of electoral officers and members of election tribunals by the DSS in Rivers, Akwa Ibom and other PDP states.
The communique read in part: “This unfortunate development has been the case since the appointment of the new Director General of the DSS, Alhaji Lawal Daura.”
Secondus also urged the President to review the appointment of Hajia Amina Zakari, the Acting Chairman of the Independent National Electoral Commission.
Secondus said the NWC deliberated on the party’s structure in Ekiti State, adding that it only recognised the State Executive Council led by Chief Idowu Faleye.
“The NWC, however, summons all critical stakeholders in the party’s administration in Ekiti state to a meeting with the national leadership on the issues,” he said.
The NWC commended and congratulated the PDP caucuses in the Senate and the House of Representatives on the smooth emergence of Minority Leaders in the National Assembly.
“We note that the process was without any interference whatsoever from the leadership of our great party in keeping with the dictates of the independence of the legislature,” he said.
NAN.
dss President Muhammadu Buhari The Peoples Democratic Party
Share. Facebook Twitter Pinterest LinkedIn Tumblr Email