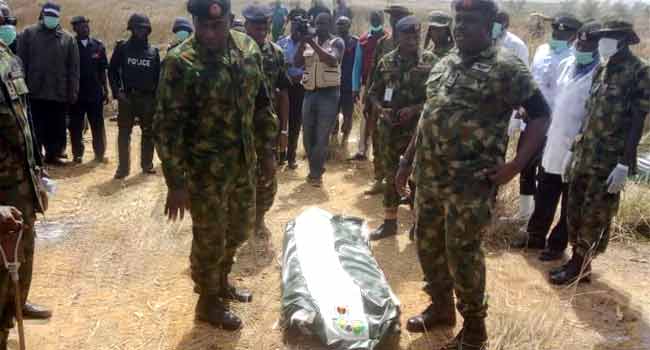 The remains of late Maj.-Gen. Idris Alkali, which was found by a team of Nigerian Army on Search and Rescue Operation, was buried at Gudu Cemetery in Abuja on Saturday.
The burial, which was concluded at around 3 p.m., was attended by the Chief of Army Staff, Lt.-Gen. Tukur Buratai, former Military Administrator of Lagos, Retired Brig.-Gen. Buba Marwa and former Minister of Works and Housing, Alhaji Sunusi Dagash.
The funeral prayer, which was led by the Chief Imam of Abuja National Mosque, Dr Kabir Mohammad, amid tears, was attended by Muslims from within and outside the Federal Capital territory.
Mohammed commended the Nigerian Army for ensuring thorough search which led to recovery of the body of the deceased, described as a “national hero”.
The chief Imam described the situation surrounding the demise of Alkali as “very unfortunate: it is very unfortunate that Alkali died this way.
He said: “However, we thank Allah that his body had been recovered.
“Even though it took weeks to trace the whereabouts of late Alkali’s corpse, we thank Allah, we thank the Federal Government and we thank the army for the dedication to find his body, so that he can be buried according to Islamic rites.”
He called on the Federal Government to look into the security situation in the country, stressing that “every Nigerian has the right to live or pass through any part of the country without being harassed or intimidated by anybody or group of people”.
Mohammed added: “This is a fundamental human and constitutional right of everybody, irrespective of tribe or religious affiliation.”
He noted that Allah did not create one particular tribe or religion to live or claim ownership of any part of the country, adding that tribe or religious differences should never be a reason for crisis in the country.
The late Senior Army officer was declared missing since September 3, 2018.
The Military directed the Garrison Commander, 3 Division, Rukuba Barrack in Plateau to find the missing general and bring him dead or alive and if anything had happened to him, the garrison should find those responsible for it.
On September 29, 2018, the Nigerian Army recovered Akali’s vehicle and his personal effects were seen and after further investigation, a shallow grave was discovered in which the general was initially buried.
Eventually, the remains of the officer was found in an abandoned well in a bush at Guchwet village in Shen Du District of Jos South Local Government Area of Plateau on Wednesday, October 31, 2018.