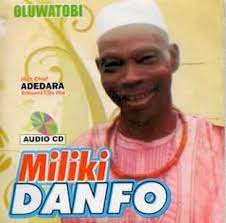 The remains of the late High Chief Adedara Arohunraloja Oba, the initiator of the indigenous Adamo Ijesa music, were on Saturday interred at his home town in Ilesa, Osun State.

The indigenous music icon, who died at the age of 92 years on April 21, 2022, was buried at his Oke-Ayo residence.

At the funeral service, Prophet Ademola Egbeyemi, Pastor-in-charge, Holiness Church of Christ (Ori-Oke Apedahun), Ilesa, called for genuine repentance of all before it was too late.

Egbeyemi said that whatever we do in secret would come to light one day, adding that everybody would be judged according to his or her deeds, either good or bad.

The cleric said that it was the turn of the late music legend, adding: “No one knows who’s next.”

Egbeyemi said that we brought nothing to this world and would take nothing away when it was time, urging all and sundry to remember death and do good while still alive.

In her remarks, the first child of the deceased, Prophetess Aderonke Adedara, who spoke with the News Agency of Nigeria on behalf of other children, thanked God for a fulfilled life of their father.

Adedara described the death of her father, the foremost Adamo-Ijesa singer, as the end of an era of indigenous music in Nigeria.

She said that children, wives and families left by father and the people of Ijesaland, Osun State and Nigeria at large would greatly missed him.

Adedara said that it would be difficult to fill the vacuum left by the late indigenous music icon.

She promised that the children would try their best to emulate the good gesture of their father.

Meanwhile, fans of the iconic singer had described the death of the foremost Adamo-Ijesa singer as the end of an era in indigenous music in Nigeria.

They said that his exit had left a big vacuum in the music industry.

The District Head of Orogba, Ilesa, where the music legend’s house is situated, Chief Omoniyi Ojo, had described Chief Adedara’s sense of humour made his lyrics as “a must listen to”.

Also, another traditional leader, Chief Akinwande Akinola, said that Adedara would not be forgotten in a hurry, especially because of his style of music.

In his contributions, Kolawole Fasugba, said that the indigenous Ijesa music symbol had played his part very well.

Fasugba then called on young Adamo singers to keep his music style alive.

Also, an Ijesa man in Diaspora, Ajayi Obe, said the deceased left behind a footprint on the sand of time, adding that his legacy would live long among the Ijesas.