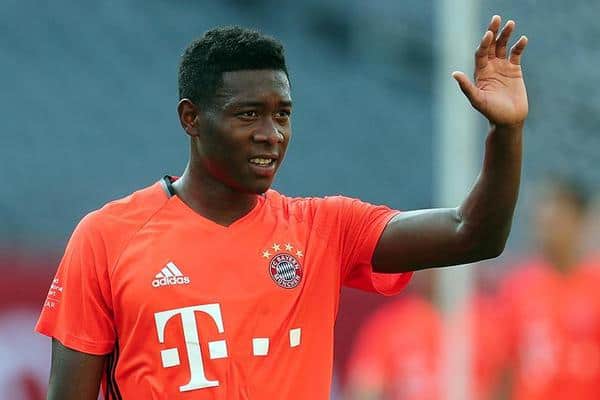 Los Blancos announced they had signed Alaba on a free transfer in May with his Bayern Munich contract set to expire, and after losing their legendary Spanish captain to PSG, his arrival will come as a welcome boost.

The 29-year-old was pictured undergoing his medical before his move could be rubber stamp, and gave the thumbs up inside the medical facility after all his checks were given the green light.

He was then called to a presentation at the Bernabeu alongside president Florentino Perez – as tradition with all major signings at the club – and admitted his pride to wear the white shirt of Madrid.

‘Hello everyone, thank you very much for the warm welcome. It’s a great day in my career, I’m very excited for it.

‘I’m very proud and honoured to wear this white jersey of Real Madrid. For sure I will give everything [so] we can be very successful together. Vamos! Hala Madrid!’

Club chief Perez said he hoped the arrival of Alaba would make fans excited and called him ‘an extraordinary footballer’, challenging him to become part of the club’s history.

‘Whenever great players arrive, Madridistas have special enthusiasm,’ he said. ‘The arrival of this magnificent player coincides with a great era with the return of Ancelotti. We want our fans to be proud of our team.

‘We welcome an extraordinary footballer, David Alaba. I want to thank you for choosing Madrid. You come from one of the great clubs in the world, a friendly club in which you have won 28 titles. You are one of the great legends of Bayern.

‘You arrive in Madrid with the highest recognition in the world of football. You now face an exciting challenge, to add titles with Madrid and be part of the history of our club. Welcome to the club with which you dream of getting new titles, welcome to your new home.’

Alaba – who arrived off the plane to Madrid on Tuesday – faces a tough task to live up to the legacy of Ramos – who played 671 times for the club and enjoyed a trophy laden spell that saw him win 11 major trophies.

At his farewell, an emotional Ramos broke down in tears and stressed that it was never his intention to depart, revealing a contract extension offer had been taken off the table.

‘The offer was accepted but it had a use-by date’ said the former Real Madrid captain. ‘They informed us a week ago that the offer had run-out.

‘I don’t know why it had an expiry date. Maybe I interpreted it wrongly or I didn’t understand it but no one told me.

‘This is a see you soon more than a goodbye. Sooner or later I will be back. And I will always keep Madrid in my heart.’

Alaba will bring with him a winning mentality that the club crave having inspired Bayern Munich to 10 Bundesliga triumphs and two Champions League victories.

He will go down as a Bayern icon having played 431 games for the Bavarian outfit since joining from Austria Wien in 2008.