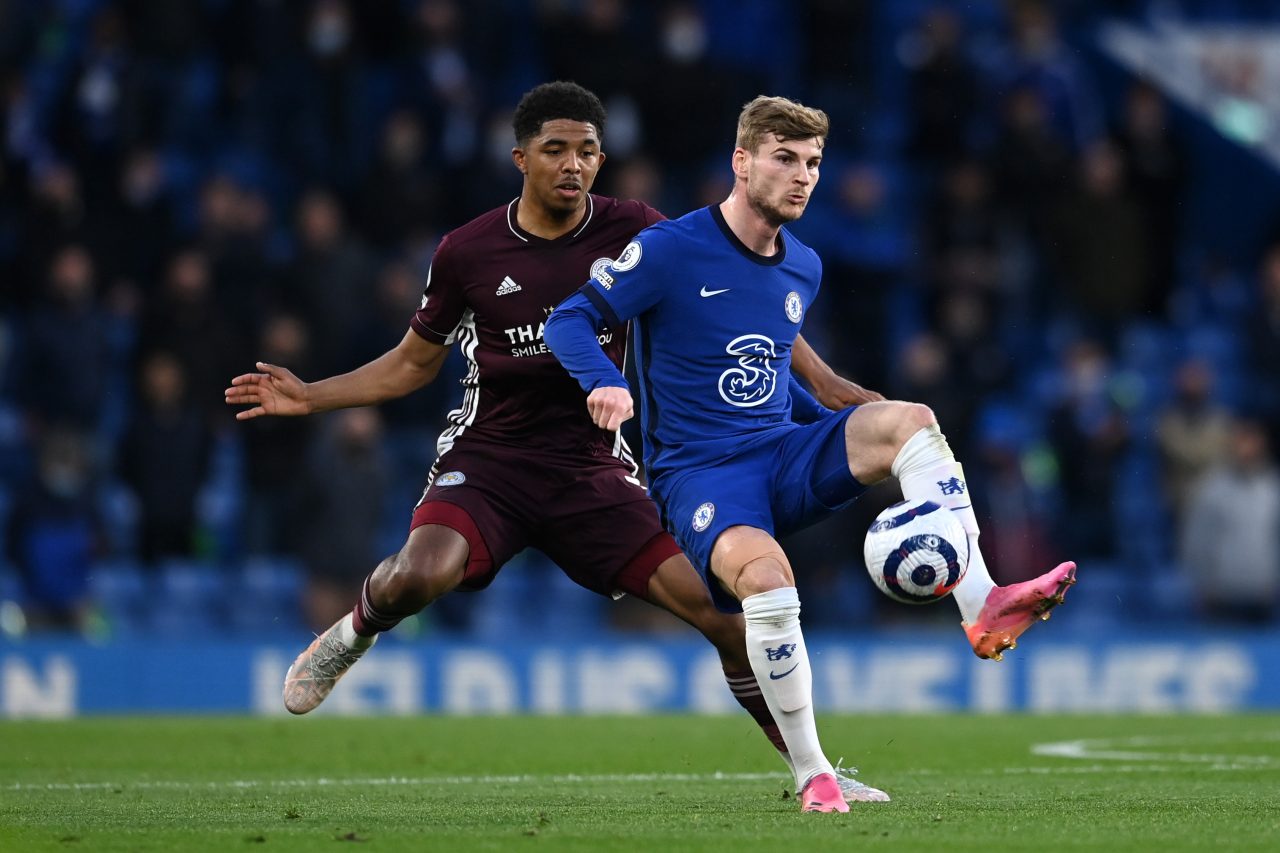 LONDON, ENGLAND - MAY 18: Timo Werner of Chelsea battles for possession with Wesley Fofana of Leicester City during the Premier League match between Chelsea and Leicester City at Stamford Bridge on May 18, 2021 in London, England. A limited number of fans will be allowed into Premier League stadiums as Coronavirus restrictions begin to ease in the UK following the COVID-19 pandemic. (Photo by Glyn Kirk - Pool/Getty Images)
Share
Facebook Twitter LinkedIn Pinterest Email

RB Leipzig are expected to complete the signing of Chelsea forward Timo Werner  on a permanent deal, two years after he left the club for the Premier League.

Chelsea met the Germany international’s £45m release clause in 2020 but will make a loss, with Werner set to return in a deal thought to be around £25m.

The 26-year-old was pictured arriving in Leipzig for a medical on Monday.

Werner scored 23 goals in 89 games in all competitions for Chelsea, winning the Champions League in 2021.

He was one of the most sought-after forwards in Europe when the Blues signed him in the summer of 2020, having also attracted interest from Liverpool, Bayern Munich and Atletico Madrid.

He scored 95 goals in 159 games in all competitions for Leipzig during his first spell at the club, after arriving from Stuttgart in 2016.

But Werner failed to replicate that goal scoring form in the English top flight, netting just 10 times in two seasons,

However he did play an important role in Chelsea’s run to European success in his first campaign, scoring in the semi-final second leg against Real Madrid.

Chelsea initially held talks with Leipzig about Werner returning to the club on loan but that has turned into a permanent deal.

During Chelsea’s pre-season tour of the United States, Werner hinted he could be happy elsewhere, with boss Thomas Tuchel responding: “I would be one of the happiest people on the planet having a contract with Chelsea.”

Werner is thought to be one of the most popular players at the training ground and there is recognition at Chelsea that he tried incredibly hard but he could not score enough goals.

Despite this, plus the pressure he was under and the criticism he faced, he remained a positive influence at Chelsea and was admired by the club’s fans for his effort.

Leipzig have also announced the signing of 19-year-old Slovenia forward Benjamin Sesko, who will remain at Red Bull Salzburg until July 2023 and will sign a five-year contract until 2028.

“The club’s philosophy of placing trust in young players and playing attractive, attacking football is a perfect fit for me,” said Sesko.

“The city, the stadium and the whole infrastructure at RB Leipzig, as well as the many good discussions with the club, convinced me that this move is absolutely the right decision.”