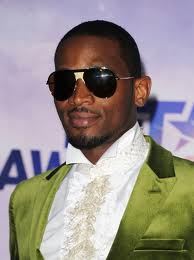 A radio presenter with the Cool FM, Dotun Ojuolape Kayode, has finally laid to rest, rumours of marriage plans with Dbanj’sister,Taiwo Oyebanji.

The rumour mills had been filled with news of Dotun tying the nuptials with D’Banj’s sister.

But, Dotun in a tweet posted yesterday said: “this is falsehood and it’s simply to smear my relationship with D’Banj.”

The handsome presenter,who was recently suspended for slapping a colleague was reported to have been rollicking with Taiwo for some time now and many believed it would lead to something permanent.

In fact,Dotun was said to have even gotten  blessing from Dbanj himself and parents concerning the marriage plans before Dotun quickly cleared the air yesterday on Tweeter.

The lady in question,Taiwo Oyebanji, was former acountant with Mo Hits Crew but has since dabbled into boutique business somewhere in Victoria Island,Lagos immediately after crisis rocked the popular music label which led to Don Jassy and D’Banj’s separation.