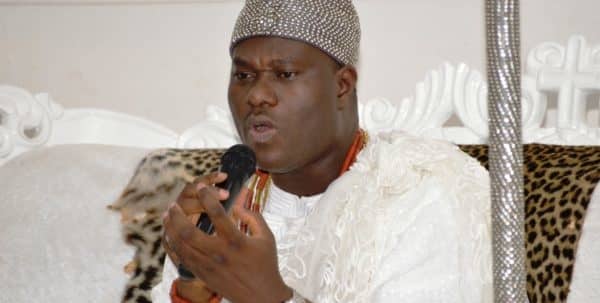 Share
Facebook Twitter LinkedIn Pinterest Email
The Ooni of Ife, Oba Enitan Ogunwusi, has said the introduction of the Queen Moremi Ajasoro beauty pageant is to reawaken cultural values and responsibilities among  Nigerian youths, especially girls.
The traditional ruler spoke with the News Agency of Nigeria through the ambassador of QMA, Princess Ronke Ademiluyi, ahead of the forthcoming Queen Moremi Pageant contest slated for December 3.
According to Obi Ogunwusi: “Our youths are gradually abandoning the cherished African cultures and traditions and are replacing them with foreign cultures that are not in any way superior to ours.
“The youths of today know little or nothing about our cultural legends.”
Ogunwusi noted that values such as selflessness, courage, patriotism and discipline, which the legendary Queen Morémi Ajasoro exhibited in her lifetime, should be the  model for contemporary and future Nigerian youths.
He said: “The idea behind organising this contest is to recreate the legacies of the revered Queen Moremi Ajasoro, impart them in our young ladies of today to prepare them for  future responsibilities as wives, mothers, community  and nation builders.”
Ogunwusi said he had set aside N5 million as registration fee to encourage the first 1,000 would-be participants for this year’s contest who might not have the financial means to obtain the forms.
He said: “I am, therefore, encouraging more young girls to embrace this exceptional opportunity of free registration.”
Ogunwusi also said the contest was opened to young girls from ages 18 years to 25 years.
He said for eligibility, one or both parents of any contestant must be of Yoruba lineage, from Ogun, Osun, Oyo, Ekiti, Lagos, Ondo, Kwara and Kogi States.
Also, Princess Ademiluyi told NAN that the new queen on emergence would become the cultural ambassador to the Ooni of Ife, and would always accompany him as part of his entourage on foreign trips.
Ademiluyi said: “The 2017 winner will receive a star prize of N5 million to set up her own business, a saloon car, wardrobe allowance and other mouth-watering gifts.
“In addition, she will have access to business advice from experts to ensure the success of such business.”
She added that all applicants who registered for QMA contest would benefit from the empowerment forum that would take place during the auditions on October 30 and October 31, 2017.
She said: “The cultural contest is a way of promoting our heroic legacies of Moremi Ajasoro which will continue to endure in the chronicles of both Yoruba and world histories.”
NAN reports that the current queen; Blessing Animasahun, a 600- level Dental-Surgery student of the University of Ibadan, was crowned by the Ooni of Ife in 2016 in Ile-Ife.
Post Views: 0
Oba Adeyeye Ogunwusi Ooni of Ife QUeen Moremi Ajasoro Queen Moremi Pageant Ronke Ademiluyi
Share. Facebook Twitter Pinterest LinkedIn Tumblr Email