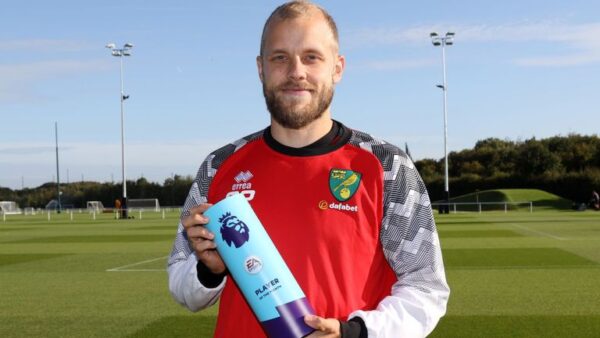 Norwich striker Teemu Pukki has been named the Premier League Player of the Month for August.
The 29-year-old beat Burnley’s Ashley Barnes, Liverpool’s Roberto Firmino and Manchester City trio Sergio Aguero, Raheem Sterling and Kevin De Bruyne to the award.
Liverpool boss Jurgen Klopp claims August’s Manager of the Month prize after his side won all four of their opening league games.
Roy Hodgson, Brendan Rodgers and Pep Guardiola were the three other nominees for the award.
Liverpool’s 3-0 win over Burnley maintained their perfect start and saw the club record a 13th consecutive league victory.
Pukki scored five goals in four games in August in what is his maiden Premier League season, including a hat-trick in their 3-1 victory against Newcastle.
The Finland international, signed on a free transfer from Danish side Brondby IF in 2018, scored 29 league goals to help Norwich seal promotion to the top flight as Sky Bet Championship winners last term.
Aguero tops the scoring chart with six to his name, ahead of team-mate Sterling (five) and Barnes (four).
Pukki and the Canaries take on City at Carrow Road on Saturday, live on Sky Sports Premier League.
Firmino, who has contributed two goals and two assists for Liverpool this season, has yet to win a Player of the Month award.