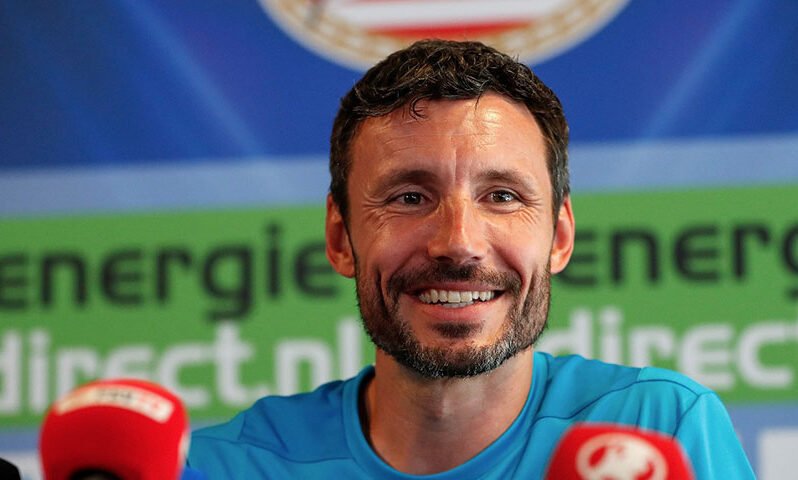 Mark van Bommel has been sacked as manager of PSV Eindhoven following a string of bad results which saw them drop to fourth in the Eredivisie table.
Last season, the Dutch giants were on course to land the title in Van Bommel’s first season in charge, having led the table for most of the way.
However, they missed out on the last day of the campaign, following a late resurgence from Ajax.
But this term has been difficult, with PSV having been eliminated from the Champions League at the play-off round before failing to qualify from their Europa League group.
“Performances and results have been far below what is expected at PSV,” General Manager Toon Gerbrands said. “Matches are measuring moments but we also keep a close eye on the progress down the road.
“We always try to help and support each other at PSV and that’s what we have done the past few months. The club’s interest will always be of prime importance. Following a review of the current status in and around the first team, we have come to this painful decision. We have all tried hard to turn things around but unfortunately failed to do so.”
In the league, PSV have lost four of their 17 matches so far, with Van Bommel’s final match a 3-1 defeat away to rivals Feyenoord.
The result saw them drop to fourth below Willem II in the table – 10 points behind joint leaders Ajax and AZ Alkmaar – and means they have picked up just 18 points in their last 26 matches.
A former PSV captain, Van Bommel spent a total of seven seasons with the club, in between spells at Barcelona, Bayern Munich and AC Milan, and won four league titles as well as the KNVB Cup.