PSG fight back to maintain perfect start with win at Rennes 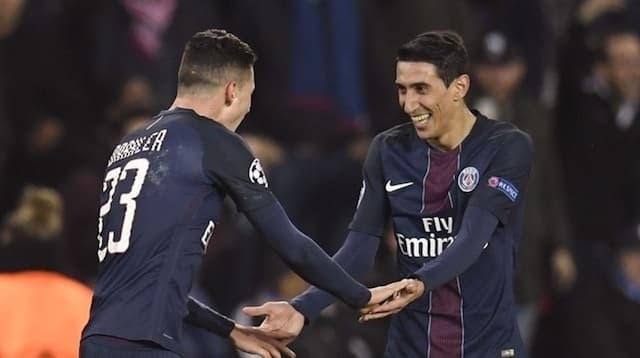 Paris St Germain stretched their perfect Ligue 1 start to six wins after coming from behind to beat Rennes 3-1 away in a rip-roaring clash on Sunday.
The result left PSG top of the French league on a maximum 18 points, five clear of second-placed Lille.
But Angel Di Maria and Thomas Meunier had to cancel out an early Adrian Rabiot own goal, which fired the adventurous home side ahead.
Second half substitute Eric Choupo-Moting added the third in the closing stages for the visitors, who rebounded from a 3-2 Champions League defeat by Liverpool on Tuesday.
Roared on by their vocal fans, Rennes twice went close before they stunned the more fancied visitors in the 11th minute.
Towering striker Mbaye Niang glanced on an in-swinging corner, which cannoned into the net off Rabiot.
The visitors quickly regained their composure and levelled on the stroke of halftime thanks to a superb Di Maria strike.
The Argentina midfielder unleashed a low shot after Edinson Cavani’s clever dummy from a Julian Draxler cut-back.
PSG continued to pile on the pressure after the break, with Cavani hitting the post and Rennes twice clearing off the line in a frantic goalmouth scramble.
Belgium international Meunier drilled his shot from just inside the penalty area into the bottom right corner of the net after a defence-splitting pass from Neymar.
The Brazilian himself came to life in the second half after a quiet opening half.
Rennes threw men forward in search of an equaliser and were punished after Choupo-Moting volleyed home from close range to put the icing on the cake for PSG.
Stoppage time drew a warm round of applause from the home crowd when a schoolboy fan got past security stewards to embrace Neymar.
The Brazil forward gave him his jersey before ushering the tearful youngster off the pitch.
Reuters/NAN.