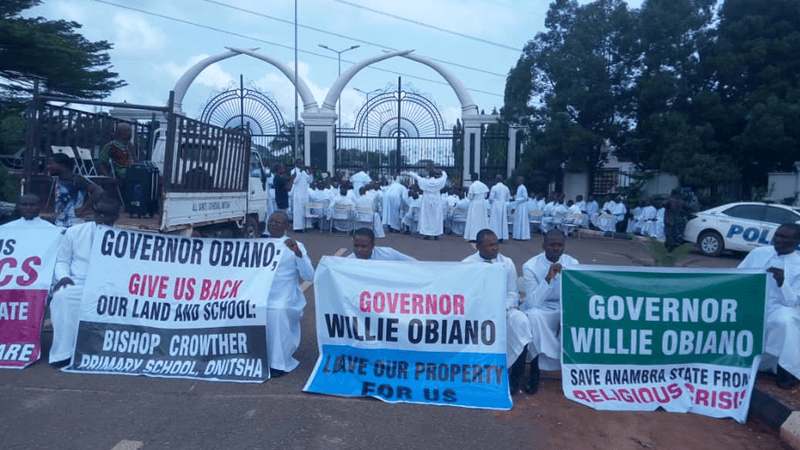 About 300 Anglican priests on Friday barricaded the Anambra State Government House in Awka to protest against the seizure of Bishop Crowther Memorial School, Onitsha allegedly belonging to the church by the state government.
The protesting priests, who bore several placards and banners, arrived at the gate of the Government House as early as 9am.
Though not allowed into the Government House by security operatives, the priest blocked the gate to prevent Governor Willie Obiano from entering or leaving the premises.
The Diocese of the Niger, Anglican Communion had been contesting the ownership of the school with the Catholic Church.
This led Obiano to ban church services in public schools in the state.
The leader of the priests and Archdeacon of Onitsha South Archdeaconry, Venerable Josiah Chukwukadibia Ofoegbu, told newsmen: “We are embittered with what is happening in our dear state.
“This present administration is turning Anambra State to a denominational state.
“It is unfortunate that this is happening many years after Bishop Ajayi Crowder who built the school left Nigeria.
“The school was handed over to the Anglican Church.
“Both Anglicans and Catholics knew about that.
“When government seized the school, it was seized from us and during the hand over to schools, it was again handed over to us.
“But it was quite unfortunate that Governor Obiano sent thugs few weeks ago to send us out of the place.
“They disgraced us in our own property.
“They dispersed the worshippers and even threatened to kill us.
“This injustice must end.
“We want to let him know that we will worship there on Sunday.
“He should prepare for war.
“We are ready to die on that land.
“Obiano should stop that discrimination.
“Some Anglicans were denied ticket in this state because they are not Catholics.
“When people like Jim Nwobodo and Nnamdi Azikiwe were leaders, they never discriminated against anybody.
“We are here to also tell the governor that we will worship at the place on Sunday and if he fails to open the place, we will open it by force.
“Nigeria and the world will hear what will happen on Sunday.”
Despite the fact that Obiano sent an Archdeacon of the Anglican Communion, who is his aide, Venerable Amaechi Okwuosa, to address them, the protesting priest insisted only the governor can do.
Okwuosa, however, said Obiano had set up a committee to look into the matter with a view to finding a lasting solution.
He said: “To the best of my knowledge, there wasn’t an official information regarding the visit.
“They are laying down their grievances, and from what they are saying, they have a misgiving regarding a school at Onitsha for which they want the governor to intervene and do the needful.
“The matter is lingering and the government headed by our governor had inaugurated a committee to look into it so that it will be resolved once and for all and that will be a precedence to other issues that are similar to this.
“Also we got from some of the clergy that this matter is in court already and speaking as a lawyer, it is pre-jurisdiction if you take some steps when the matter is still subsisting in court.
“They should let the law run its course instead of getting in the way.
“I told them that if what they are saying is true, I will advise them to wait and let the court resolve the matter.
“Also, if the bishops of the Anglican Communion are coming to the see the governor, they should wait for the outcome of the meeting.
“We have spoken to their leaders and let them know that if they had spoken to us about their coming, the governor would have adjusted his time.
“The governor is not on seat because he did not have any formal notice.
“I want to say very clearly that the government of Anambra State is very sensitive to matters like this and the government is not out to take property belonging to a church or individual.
“I am pleading with them to eschew violence and follow it to a peaceful conclusion.
“Also, I am aware that the nine Bishops of Anglican Communion had met regarding this issue to which they had agreed to come see the governor and he is looking forward to seeing them to resolve the matter very soon.
“I feel bad that they are outside in the sun because I am one of them.”