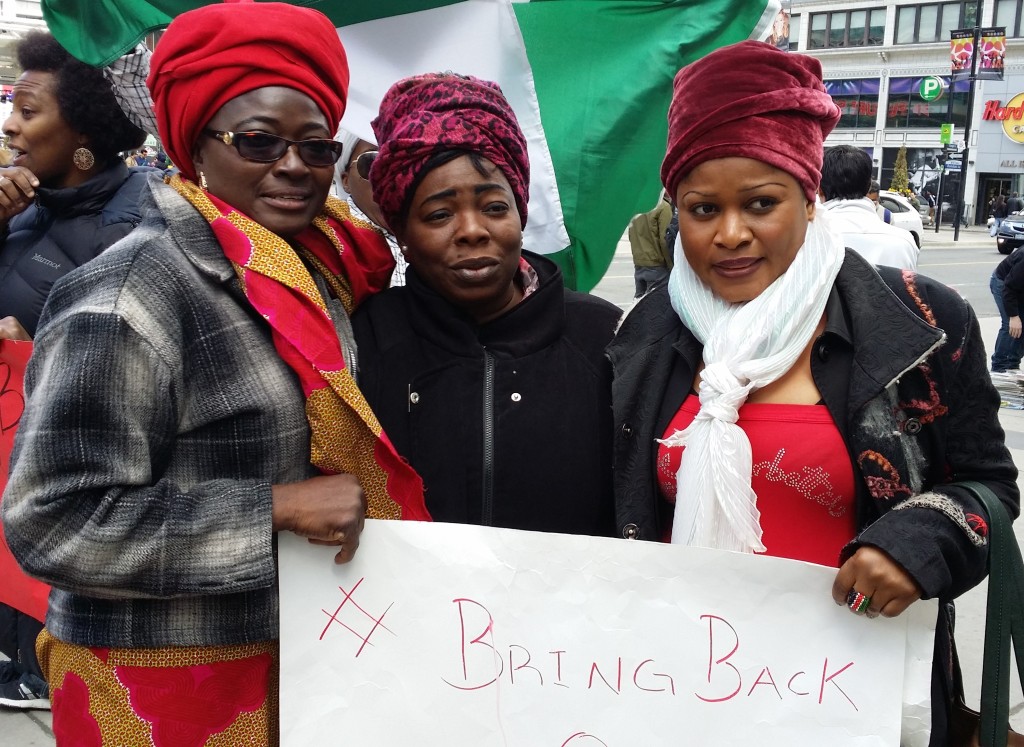 Femi Shodunke
Nigerians in Canada on Sunday embarked on a protest to draw international attention to the abduction of 234 girls in a secondary school in Nigeria.
The diasporans called on the international community to promptly wade in before it is too late.
The protesters urged other countries to act fast to save the lives of the girls who were abducted in their hostels at Government Girls Secondary School, Chibok in Borno State since April 14 by the dreaded Islamic sect, Boko Haram.
Among leaders of various organisations at the protest, which took place at the Dundas Square, Toronto, were Funmi Olumade, the President of the Queen of Nigerian Canadian Community; Sonia Oduwa Aimy, the Executive and Artistic Director, African Women in Acting; Chief ‘Femi Shodunke, the President, Olumo Progressives Association, Canada Inc; an Immigration and Refugee Consultant, Adeniyi Temowo; and Detola Aduke Ogunsanya.
Nationals of other countries, particularly Africa – Somalia, Ghana, Ethopia, and Jamaica, among others – joined the protesters, even as other passersby took time, at intervals, to display the Nigerian flag and the placards.
With series of placards, the protesters – many of whom were women – sang various songs to draw attention to the activities of the Islamic group, which the American Government has designated as a “foreign terrorist organisation.”
Specifically, the organisers urged the government of Canada, the country where many of the protesters are citizens and legal residents, to assist Nigeria in bring to an end the activities of Boko Haram, which they said has given Nigeria a bad name among the comity of nations.
“We demand immediate release of our girls, as we want them released now and we want them alive,” Olumade, who is also the Secretary, Board of Nigerian Canadian Association said. “This is why we are calling on the international community, Canada in particular where we reside to assist Nigeria to curb the activities of this wicked group Boko Haram.
“Our protest here today is to create awareness, to make international community to support us to free our girls; we want various countries of the world to intervene, we want them to help us find the abducted girls and we call on the Nigeria government too to act fast, and now.”
Also speaking at the event, Aimy said Nigerians in the diaspora can no longer fold their arms while the girls are in the captivity of the Boko Haram, and as the Islamic group continues to terrorise the country.
“Enough is enough, we cannot keep quite while our girls’ whereabouts are unknown up till now,” Aimy, who was accompanied by her husband, Muoi Nene, said. “Boko Haram is an evil organisation, we condemn their activities because we want peace in our country.
“The international community and the Nigerian government should act now to save our girls; our lives must be protected by the government of our country; that is why we are here to let the whole world know what is going on in Nigeria; this impunity must stop and the activities of Boko Haram must be curtailed.”
While explaining the rationale for the protest, Ogunsanya said: “We are embarking on this protest to call on other countries to help us curb the devilish activities of Boko Haram as our government appears not to be doing enough.
“President Goodluck Jonathan’s administration is not acting enough to convince us that it could halt the wanton destructions, abductions and killings going on in our country.
“And we can no longer fold our alms and watch what’s going on; that’s why we Nigerians in diaspora decided to add our voice to the call for the freedom of our girls and the need to end Boko Haram in Nigeria.”
Some of the placards at the protest read: “Wake Up Nigeria…Bring Back Our Girls,” “Africans Are United Against Oppression of Any Group…Bring Back Our Girls,” “Rise for Justice,” “Canadians, Where Is Our Canadian Government? Put Pressure on Our Government, Provide Materials to End Boko Haram.”