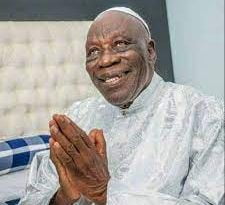 Ministers of God have again been enjoined to preach the undiluted word of God to win souls for the kingdom.

The Spiritual Father and Chairman, Cherubim and Seraphim Movement Church Worldwide, Prophet Samuel Abidoye, gave the charge at the ordination of pastors held at the International Headquarters of the church, Galilee Land, Orile Igbon.

Prophet Abidoye charged the new pastors to be vessels unto honour and follow righteousness.

The Spiritual Father called on them to provide leadership and divine guidance for the nation to excel and overcome its challenges.

He challenged the ministers to be focused, prayerful and depart from iniquity to excel in their assignment.

The Conference Supervising Pastor, Pastor Fola Onafuye, urged the 477 pastors to be firm in the word of God, uphold moral and pastoral integrity to succeed in their calling.

Pastor Onafuye also called on the government to go back to God and work in His way and stop depending on their ability and knowledge to revive the nation.

The Conference Supervising Pastor prophesies that Nigeria’s economy would come back, and called on the people to depend on God for great turnaround.

The fifteenth convention is themed ‘Liberated for Supernatural Turnaround’.