Promise of entrepreneurship banks must be kept – Osinbajo 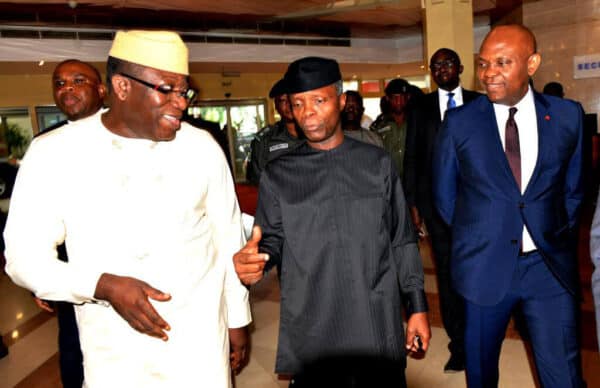 Vice President Yemi Osinbajo says that the promise of establishing entrepreneurship banks in Africa is one that must be kept.
Osinbajo expressed this view in his address at the fifth edition of the Tony Elumelu Foundation Entrepreneurship Forum 2019 on Saturday in Abuja.
The two-day event has the theme: “Empowering Young Africans.”
African leaders present were Presidents Paul Kagame of Rwanda, Macky Sall of Senegal, Felix Tshisekedi of Congo DRC and Ugandan Prime Minister Ruhakana Rugunda .
Osinbajo said African schools should not only teach science and technology but focus also on critical thinking and entrepreneurship.
He said: “Our continent continues to be defined by unsavoury and unwholesome stories, which do not often accurately represent the reality of life and opportunity.
“The people in this room are the perfect and long-awaited counterpoints to those one-dimensional narratives of Africa that have sadly gained ground over the years.
“Outside on the streets of every village, town and city are many more individual embodiments of the potential of Africa.
“But we can change that story; we must fund young entrepreneurs and provide opportunities for capacity building.
“Our school curriculum must emphasise not just stem but critical thinking and entrepreneurship, and the promise of entrepreneurship banks must be kept.”
The Vice President said the event attracted a great representation of what the private sector could accomplish.
Osinbajo said African governments were challenged to create the enabling environment for all young entrepreneurs to thrive.
Osinbajo said by birthing the intervention, Elumelu had compelled stakeholders to focus on what really mattered, the youth and their dreams.
According to him, the message to Africa’s emerging business giants is a clear one: how and what can you contribute, like Elumelu, to empowering the next generation, adding: “Helping them rewrite and revise the next chapter of the continent’s changing stories?”
The event also featured a question and answer session moderated by Fareed Rafiq Zakaria, host of CNN’s Fareed Zakaria GPS, in which Osinbajo, Kagame, Sall, Tshisekedi and Rugunda fielded questions from the audience.
Responding to a question on what the government was doing in terms of boosting entrepreneurship by proving requisite infrastructure and power, Osinbajo said in the last two circles, the Federal Government had invested about N2.7 trillion in infrastructure.
He said that was the highest ever in the history of the country as the government was making huge investments in infrastructure.
He added: “Beginning with railways, we have started the Lagos-Kano railway because we very strongly believe that we must connect the country.
“We are also doing the Lagos-Kano railway; we have completed the first phase of it; we are going to build the Lagos Port Harcourt railway, among others.
“All of these cost money, which is why we require a good amount of private capital, a good amount of private investment.”
Osinbajo said the power was privatised in 2005 so that generation and distribution were given to private companies, while the government took over the transmission.
He said: “We have found that several of the DisCos, which the assets of power company were given, simply did not have the required resources, first to ensure that they were able to build more distribution, metering and all of that assets and government has supported them.
“Today, we are re-thinking of all that; we are looking at willing buyer/willing seller arrangement.
“We are going to more private sector companies who are willing to render end to end service.
“We started that already in a few places; for example, in Ariaria market in Aba, in Sabon-Garri market in Kano.”
On his part, Kagame said Rwanda’s high rating in World Bank’s Ease of Doing Business was achieved by working on the psyche of the people and doing the right things.
He said Rwandans were made to believe that they could do it on their own.
He said: “We looked for ways of doing things differently; we changed the mindset of the people and enthroned good governance and enabling environment.
“We convinced ourselves that there were no other alternatives.”
More so, Rugunda said women in Uganda and Africa in general were disadvantaged by cultural issues.
He said an affirmative action was needed to address the problem and empower more African women.
Governors Kayode Fayemi of Ekiti State, Atiku Bagudu of Kebbi State, Abubakar Bello of Niger State and Abdulrahman Abdulrazak of Kwara State graced the event.