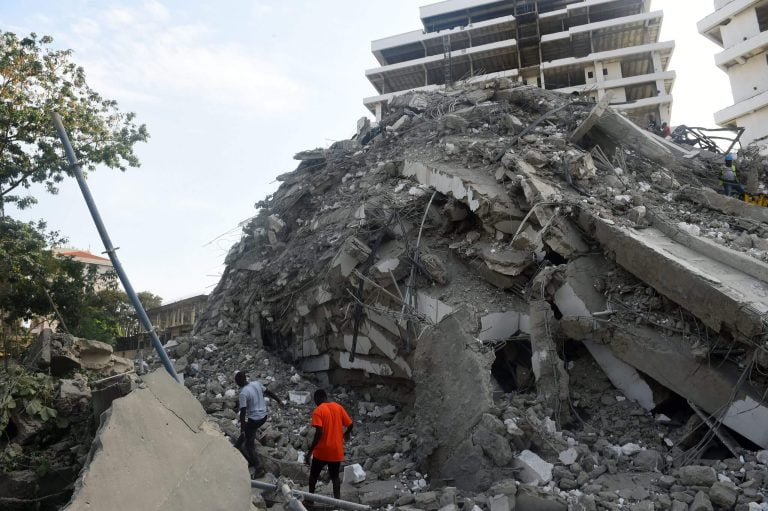 At last the identities of prominent individuals and companies behind the Ikoyi, Lagos State building have been unveiled.

The Eagle Online recalls that the building, at 44B, Gerard Road, collapsed on November 1, 2021, killing 44 persons.

The owner was identified as Femi Odubona, the Managing Director of Fourscore Heights Limited, but the investors had remained unknown until date.

According to information available to The Eagle Online, there are two companies and several prominent individuals that invested in the project.

The identities of the subscribers, who were reported to have paid several thousands of dollars to acquire apartments there, were unveiled following the decision to sue the Lagos State Government that had marked the other two buildings on the premises for demolition.

The buildings had been certified them unfit to stand.

Among the already identified owners of the apartments are a Senior Advocate of Nigeria, Oluwemimo Adepoju Ogunde; a Chartered Accountant and Senior Pastor of Jesus House, Baltimore, United States of America, Adetola Odutola; two other Odutolas: Bola Odutola and Bunmi Odutola; and Senior Pastor of the Redeemed Christian Church of God, Jesus House, DC Parish, United States of America and contestant for the throne of the Soun of Ogbomoso in Oyo State, Pastor Afolabi Ghandi Olaoye.

Two companies: Kwara Business School Limited and Saikoyi Property Limited, are also have interests in the property though the owners were not specified.

A government source said the state was studying the memorandum of claim served on the company handling the demolition of the two buildings that were left standing after the incident.

The source added: “However, it is not right for them to say that the government can’t take over the property.

“The law states explicitly that when a property collapses, the government automatically takes over the property.

“It’s all in the public interest and the government said so.

“Where were they when the Panel of Inquiry sat and took far-reaching decisions on the matter?

“The Government has even issued a White Paper.

“Were they ashamed of claiming their right?

“Don’t you wonder the kind of investors we are talking about?

“They couldn’t even ask for insurance before shelling out the huge cash they claimed to have paid the late owner of the property.”

They said it was the alleged negligence of government agencies that led to the collapse of the building, but a source who testified at the sitting of the Panel of Inquiry said that there was evidence that the site was sealed off by the Ministry of Physical Planning.

The source said: “Its officials were attacked at the site.

“In fact, the promoter of the project was arrested.

“The site was reopened and the promoter was yet to show proof of all he was asked to do before the building collapsed.

“Now, they want to put the blame on the government; that is being clever by half.

“Now that the owners or potential owners of the doomed property have shown their face, those who lost their loved ones can go after them for compensation.”

The Lagos State Government was yet to react to the call for a meeting by the subscribers.

In the suit filed by the claimants through their attorney, Joseph Omoba, they said the building collapsed as a result of government’s negligence.

They argued that the government should not be allowed to benefit from its negligence by compulsorily, wrongfully, illegally and punitively acquiring or threatening to acquire the property known as “360° Ikoyi” at 44BCD, Gerrard Road, Ikoyi, Lagos covered by Certificate of Occupancy Number 48/48/2020A dated February 3, 2020 and registered as Number 48 at Page 48 in Volume 2020A at the Land Registry, Alausa, Ikeja, Lagos State through forfeiture and/or purported forfeiture to the Lagos State Government following the collapse of one of the towers.

The claimants argued that any compulsory acquisition of the property by way of forfeiture in favour of the Lagos State Government would amount to rewarding the government by making it take benefit from the negligence of one of its agencies and in complete disregard of the equitable interest of the applicants, which was worthy of protection by the court.