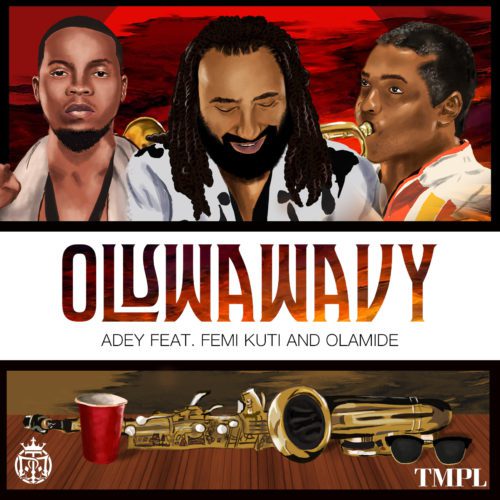 Wave-making producer, Adegboyega Ogunlesi, popularly known as Adey, links up in his new song, Oluwawavy, with two music heavyweights, Grammy award-nominated musician Femi Kuti and YBNL rapper Olamide.
Adey steps out of the console by adding his impressive vocals to his own sublime beat.
The club-banging tune meets a perfect match in Afrobeat legend Femi Kuti’s brilliant horns and is finished off by Olamide’s lyrics that his street fans love dearly.
The Temple Music producer and artiste chose to release his new hot tune on his birthday, December 13, 2017.
Oluwawavy is now available on all local and international digital stores, including iTunes, Spotify, Boomplay and Music Plus.
With his new song, the dreadlocked producer ends his year on a high following a successful year as one of the biggest producers with credits for Ycee’s Juice and Wavy Level by Olamide.
Cloud 9: http://cloud9.com.ng/adey-feat-olamide-femi-kuti/oluwawavy-single/oluwawavy/
Boomplay: http://www.boomplaymusic.com/share/album/849379
Music Plus: http://mpjamz.com/x/5d5fbdf39