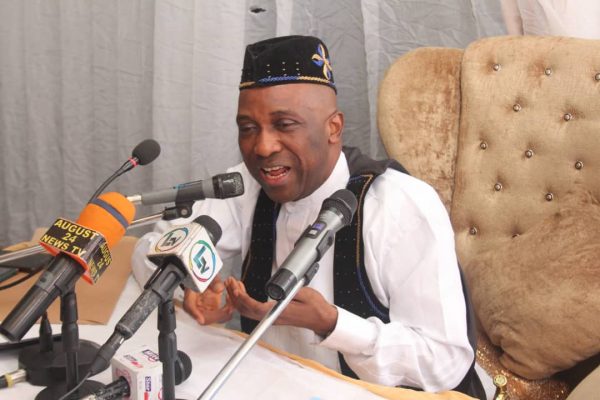 The Leader of INRI Evangelical Spiritual Church, Primate Elijah Ayodele has revealed the best candidate to become the next president of the Nigeria football federation (NFF) ahead of the election which is set to hold next month.

In a statement signed by his media aide, Osho Oluwatosin, Primate Ayodele made it known that the best person to replace the incumbent president, Amaju Pinnick is Alhaji Ibrahim Gusau who is currently the Chairman of Football Association Chairmen.

The man of God hailed Amaju Pinnick for what he has done for the football federation while urging him to support Gusau who he said is the only one that can make the football system of the country better than it is and also build on the legacies of the outgoing president.

‘’Amaju Pinnick has done so much for Nigerian football and he needs someone who will build on his good legacies. The best person that can do better than Pinnick in NFF is Alhaji Ibrahim Gusau’’

“I am not a footballer or an NFF official but that’s what God has shown me, Gusau is the only man that can bring success to Nigeria football and perform excellently well.’’

Primate Ayodele further noted that with Alh Ibrahim Gusau, Nigeria football will have a better outing and will become the giant of African football.

‘’Nigeria football will have a better outing, the team will become the giant of African football and the person God has ordained to take Nigeria’s football to that promise land is Alh Ibrahim Gusau, any other person will not make it better.’’