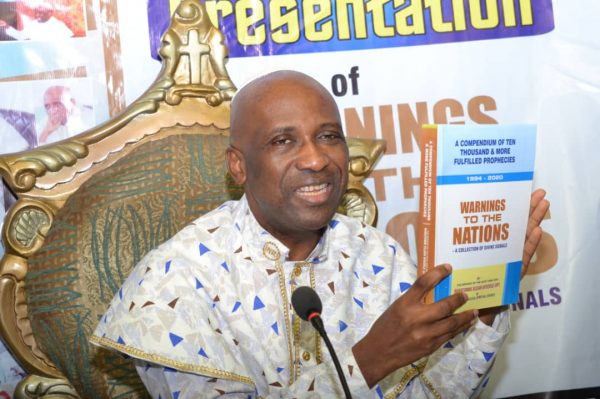 Primate Ayodele made the revelations known in a telephone interview on Wednesday.

The man of God revealed that he foresees that the President of the Nigeria Football Federation, Amaju Pinnick, doing a lot to make Nigerian football great again, especially in the upcoming Senior World Cup.

He therefore warned him not to resign his post as the NFF Chairman, but wait till his tenure expires.

The popular prophet, who recently organised a prayer session for Pinnick due to his ambition to become a member of the FIFA Council, revealed that if he remains as the president, the Super Eagles will get to the quarterfinal stage in the World Cup.

Ayodele said: “The NFF President, Amaju Pinnick, has a great role to play in the World Cup 2022.

“Although he will be contesting to become a member of the FIFA Council soon, the lord says he shouldn’t resign his position as the President.

“With him as the President of NFF, Super Eagles will thrive and get to quarterfinal in the World Cup.

“He should wait till his tenure expires before leaving.”

Also, Primate Ayodele gave another prophecy on Patrice Motsepe, a South African who wants to contest for the seat of the president of the Confederation of African Football.

He revealed that some principal officers want to gang up against his ambition, and that he needs to be careful or else he will lose the election.

He said: “For CAF Presidency, Patrice Motsepe has a very good standing to become the winner, but I foresee some CAF principal officers ganging up against his presidential bid.

“He must be careful so that he will not lose the election.

“He also must be strategic and work very hard.”

. Let us pray so that we will not lose any one time CAF official

. LASSO FC coach will be removed

. Let us pray against the death of any coach in Africa

. Emmanuel Amunike to resign from Tanzanian club he is coaching

. Cote d’ivoire coach to be removed

. Benin Republic VS Nigeria: Super Eagles victory lies between first 30 minutes in the first half and the first 20 mins in the second half. The coach needs to be watchful of that the match will be tough. It will be between 1-0 and 2-0

. Nigeria VS Lesoto: Super Eagles can beat them 3-0 if they don’t take it with levity.